Almost one in three council-maintained English secondary schools were in budget deficit in 2017-18, according to damning new figures from the Education Policy Institute (EPI).

It is urgent that unions and councils mount a fightbackagainst Tory vandalism of state education. 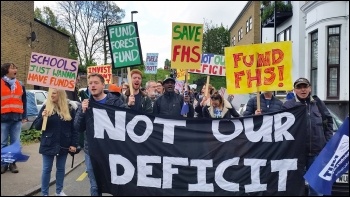 Staff and parents marching to save jobs at Forest Hill School in Lewisham, south London, 22.4.17

This latest report comes after warnings from education unions that funding pressures are leading to unsafe classroom sizes, fewer subject choices, increased exclusions from school, and failures to meet statutory responsibilities for children with special educational needs and disabilities.

And this financial year, the number of schools unable to balance their books is set to increase. A survey by the National Association of Head Teachers reveals three-quarters of heads expect to face an in-year deficit.

Teachers, parents and school students don’t need statistical evidence of underfunding – they see it every day.

But government ministers refuse to acknowledge the problem. They aim to destroy the idea that ordinary people are entitled to a decent education – as part of a drive to cut tax for big business and disarm working-class resistance.

Jeremy Corbyn’s 2017 manifesto pledged a £5.6 billion increase in school funding. But schools can’t hold on for a Labour government – they’re in crisis now.

Rather than being made to implement further cutbacks, Labour-controlled councils should help schools to maintain no-cuts deficit budgets.

And John McDonnell should promise an incoming Labour government will pay any debts off.

Union leaders are hoping the Tories will increase pupil funding as part of this year’s spending review – a recommendation made by the EPI.

The think-tank’s report also calls on the government to reconsider rules about redistributing surpluses from schools with money in reserve.

But while there is disparity between different schools’ financial situations, all state schools have seen a real-terms cut in funds since 2010.

The only solution is a fully funded, publicly owned education system, responsive to the needs of teachers, students and parents through their elected control.

Under a socialist system, this would be achieved not by redistributing limited funds in a profoundly underfunded system, but by taking the wealth off the super-rich and big corporations and planning it democratically for the benefit of all.