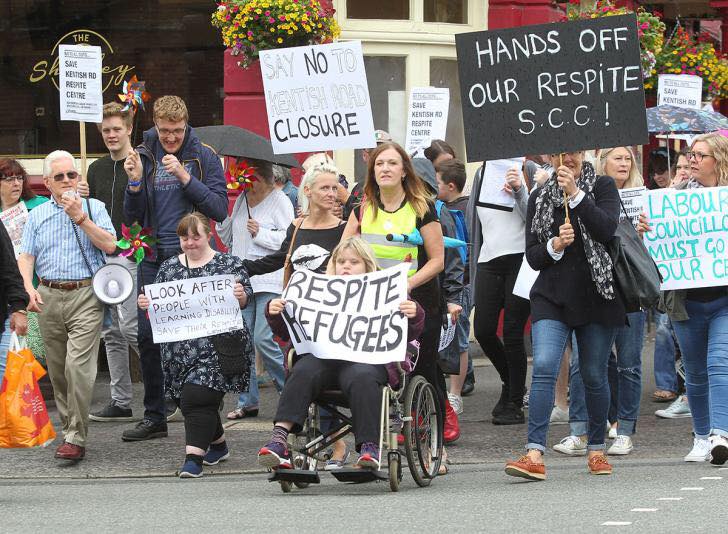 Restore Council Funding! Restore Council Jobs & Services! We want our £120 million back!
Re-Elect Southampton anti-cuts councillor, Keith Morrell, May 3rd, 2018
On Thursday 3 May, Southampton anti-cuts councillor is standing for re-election in Coxford. Since his expulsion from the Labour Party in 2012 for voting against cuts with fellow Coxford councillor Don Thomas, Keith has continued to oppose Tory cuts carried out by the local Labour council.
He was re-elected as an independent anti-cuts councillor in 2014, recognition for the role he has played locally in offering an alternative to austerity. In 2013 he successfully presented a No Cuts budget to Southampton City Council, only for Labour councillors to block its debate.
More recently Keith has led a successful campaign with local parents to stop the closure of Kentish Road Respite Centre. Those parents are now standing as anti-cuts candidates in the local elections in Southampton, pressing to make sure that the centre is fully opened to meet the needs of the community. The Southampton Fair Funding Campaign has had the backing of all Coxford councillors, as Labour pressure local schools in carrying out cuts. Keith has backed the campaigns call for the Labour council to use ‘licensed deficits’ to protect school budgets.
https://www.socialistparty.org.uk/articles/27111/28-03-2018/southampton-asks-what-will-you-do-to-stop-education-cuts

5 candidates from Trade Unionists & Socialists Against Cuts will stand alongside Keith in the Southampton council elections.
So re-electing Keith on May 3rd, will be a major boost to all those opposed to cuts, all those enthused by Corbyn’s anti-austerity manifesto and all those who are willing to challenge Corbyn’s opponents, the Blairite cutters in local councils.
£120 million has been stripped from the Southampton Council annual budget by Tory cuts at the cost of over 1000 jobs and vital services. Keith is demanding the restoration of government funding and appealing to his supporters to back that campaign.
You can support Keith’s campaign by coming to Coxford. Help us deliver election material. Join our campaign stalls. Back our canvass team and talk to local voters about Keith’s campaign.
We are active every day, so there is always something you can do to help. If you are travelling from outside Southampton join our Sunday canvass team to ensure we speak to as many voters as possible and convince them of the importance of keeping their local anti-cuts councillor on the council.
Please reply to the email, text or call me on 07833 681910 and let me know how you can help.
You can donate to the campaign using the Socialist Party Donate button and adding “Re-elect Keith Morrell” in the text box.
https://www.socialistparty.org.uk/main/donate
We meet everyday at Sainsbury’s Lordshill
Mon-Fri 10.30am
Mon-Fri 2pm
Mon-Thurs 6pm
Sat 10.30 and 2pm
Sunday 12 noon
Please text Nick Chaffey on 07833 681910 to confirm if you are coming, thanks.