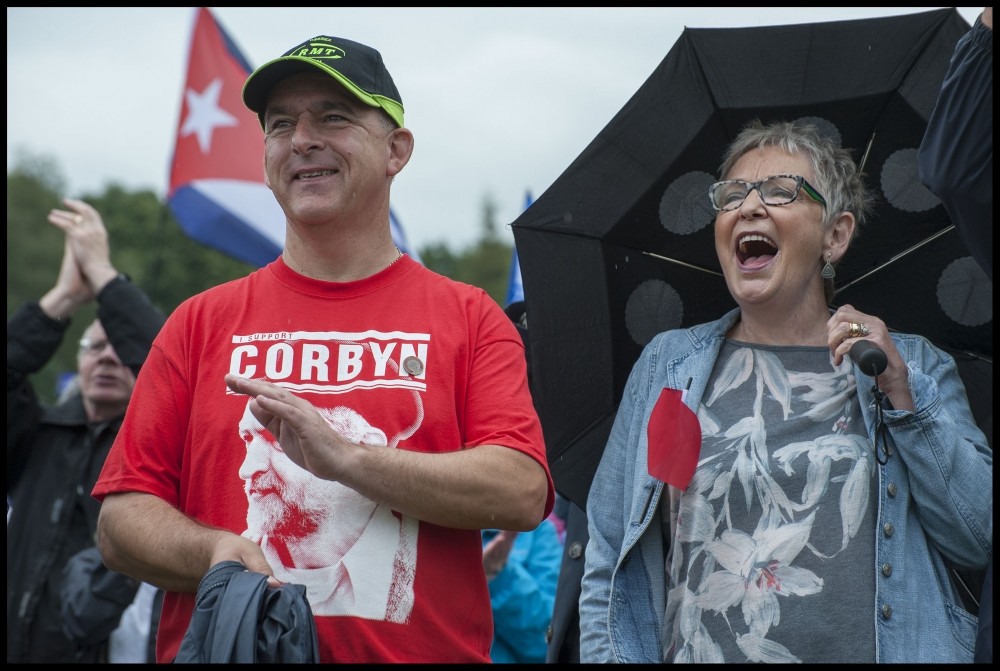 “All is forgiven!” So claimed Christine Shawcroft, a Labour NEC member, when asked for her message to the 172 MPs who had declared ‘no confidence’ in Jeremy Corbyn. It was not the answer the 90 Momentum supporters packed into a standing-room-only meeting at Portsmouth‘s Rail Club had come to hear.

There was more to come. “When Jeremy wins again, our message will be that now is the time for the Parliamentary Labour Party to respect the members’ decision”, Christine Shawcroft declared.

It fell to RMT transport union president Sean Hoyle, applauded back into his home town, to point out that it was either extreme political naivety or simple cowardice to think the Blairites would ever respect the membership when they had just disenfranchised 100,000 of its number.

“Make no mistake, there has been an organised attempt to get rid of Jeremy from day one”, Sean said. “You cannot negotiate with these people. Their interests are not the same as ours. It’s time for them to go”.

Sean outlined that while his union is not affiliated to Labour, the RMT has long supported Jeremy Corbyn and would continue to stand by him. Now, Sean told the audience, is the time to be bold; to use the campaign to defend Corbyn to move the centre of power away from MPs to the membership.

“And let us be honest”, Sean said, “why should we fear a split? I’d rather have a party with half a million members and 40 MPs who are loyal to those members, than a party led by 172 traitors. It’s time for the tail to stop wagging the dog”.

Like Christine Shawcroft’s, Sean’s speech was not what many of the audience had expected. Unlike Christine, Sean had clearly articulated their anger. When the applause ended the floodgates were opened to contributions from the floor which unanimously echoed his call.

The message from Portsmouth is clear. If Jeremy Corbyn‘s leadership is to achieve anything, the ‘left’ on the NEC, and indeed Corbyn himself, must abandon cautious pleas for ‘unity’ and go on the offensive against a right wing which can neither be persuaded nor contained.

Jeremy Corbyn must use his position to restore democracy to the Labour Party; to empower members to select and de-select their own MPs; to make sure all half a million members not only have a vote, but have genuine ownership over their own party.

Without that, the Labour Party’s machinery will always be a straitjacket to any left wing leader, while the membership will be relegated to a voiceless army of door knockers and leaflet stuffers.

After all, as a new Momentum member pointed out: “Defeating Owen Smith should be the easy round. If we’re timid now we don’t stand a hope against the Tories. We either fight now or we lose it all”.