It was a spooky affair outside Prysmian Cables in Eastleigh on 31 October with workers joining the picket line dressed appropriately for Halloween.

One worker jokingly said: “We’re trying to scare management back to the table”. Fittingly there was a worker dressed as a ghost alongside a mocked-up headstone with “RIP fair pay” written on it.

This is now the sixth week that Unite members have been in dispute with the company over a derisory pay offer. It is below inflation and comes on the back of previous years of real-terms wage cuts.

Steve Phillips, one of the branch activists, said that there has still been no contact from management – although it has now been said that conciliation service Acas will be brought in to facilitate talks. Details and confirmation of this have not yet been received. 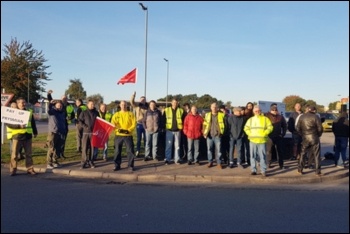 Speaking to workers on the picket line it was immediately obvious that there is a determined mood and some defiance.

It is now known that the strike, as well as overtime bans and the work-to-rule currently in place inside the factory, have had an impact on output – with significant financial implications for the company. One source stated that production has fallen to as little as half of what it was before the dispute.

The majority of workers told me that morale inside the factory is at an all-time low. But morale for the strike and ongoing dispute is high and growing.

Some described how a manager had passed a previous picket line and had stuck a middle finger up towards the workers on entering the factory! This further strengthened the anger and resolve of the pickets.

One had what he called the perfect response to the manager: his Halloween outfit consisted of a big foam head in the shape of a fist with a large middle finger raised in the air.

Many deliveries to the site were stopped by other workers arriving and refusing to cross the picket line. They were cheered and clapped as they left the factory with some tooting horns in support of the dispute, along with other passing vehicles.