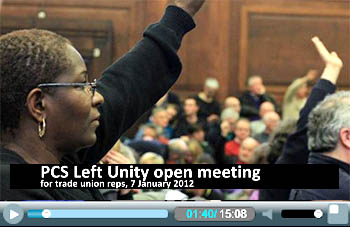 We say: NO WAY! Strike to defend pensions On
Saturday 7 January Left Unity in the PCS civil service union hosted an
emergency open organising meeting because our movement in defence of
public sector pensions is at a critical point. It is vital that the momentum generated by the fantastic strike on 30 November (N30) is not lost.
The government tried to force the unions to sign up to a rotten deal
before Christmas. Unfortunately the leaders of some unions indicated
they wished to sign this ‘heads of agreement’ which proposed exactly
what N30 had been against: paying more, working longer and getting less.
December’s events meant that members were in danger of being
tragically let down and everything possible is needed to be done to
prevent this happening. However, a number of unions have joined PCS among the ‘rejectionists’, refusing to sign up.
Pensions have been fought for over generations. The Con-Dems’ attacks
mean all these gains could be lost. Our job is now to maintain the
pressure, unite across unions and not let the gains of the biggest
action since the 1926 general strike be lost.
Our message is clear – reject the offer and organise for further action.

The conference unanimously agreed a statement which concluded with the following bullet points: