Council cuts can be fought – and they must be!

Editorial of the Socialist, issue 936 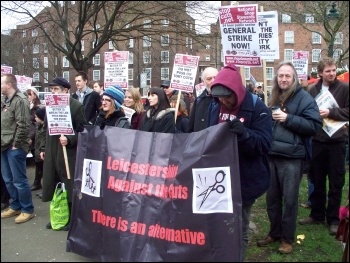 During February many council budget-setting meetings are taking place across the country, slashing millions more pounds off vital services.

Birmingham council, the biggest in England, has already cut around £590 million from its annual budget since 2010 and is expecting to cut another £180 million by 2021. The chief executive of that presently Labour-run council warned: “We are fast reaching the point where there could be catastrophic consequences for some people.” This is an understatement, as many of the most vulnerable people have already suffered terrible consequences. Far fewer elderly people are receiving needed help, the number of people sleeping on the city’s streets has quadrupled and children’s and youth services have been callously cut to the bone.

The same shattering picture is seen almost everywhere, following the 40% real-terms reduction in core funding to councils from government over the last five years. This year the knife isn’t just slicing in but is being twisted, because the government is allowing councils the leeway to impose an extra 3% increase in council tax to cover for cuts in social care.

This brings the total possible increase in council tax without holding a local referendum to 4.99%. However, while squeezing household finances further, it would be nowhere near enough to adequately fund social care in most areas.

How ironic it is that the only opposition to this scenario that has achieved media prominence in recent weeks has been from the Tory leader of Surrey county council, David Hodge. To put pressure on the government he announced a shock plan to hold a local referendum on a 15% council tax rise.

The referendum was later suddenly called off and Jeremy Corbyn managed to successfully draw attention to a secret deal that Hodge appeared to have reached with Theresa May’s government. Corbyn wrong-footed May in parliament by questioning her about the content of text messages mistakenly sent by Hodge to the wrong person, which indicated that a ‘sweetheart deal’ had been struck.

Hodge had no doubt been using his weight as the leader of the Conservative group in the Local Government Association and the fact that two leading Tory government ministers are Surrey MPs: Health Secretary Jeremy Hunt and Chancellor Philip Hammond.

Certainly Hodge impressed anti-Corbyn Guardian columnist Polly Toynbee, who wrote: “Over recent years I have admired David Hodge’s fearless crescendo of complaint against his own government… That sets him apart from the craven mass of Tory council leaders obediently wielding the axe… Hodge might never have intended his referendum, but he has used every lever, including journalists like me, to rattle the government’s cage: no harm in a bit of cage-rattling in a good cause.”

But what about the ‘craven mass’ of Labour council leaders who are ‘obediently wielding the axe’? Anyone who ‘sets themselves apart’ from them has only received Toynbee’s disdain and criticism. And why can’t Jeremy Corbyn draw on more than a mini rebellion by a Tory council leader to fuel his challenge in parliament to the cuts? Corbyn and John McDonnell have not yet supported the idea of Labour councillors conducting a much more meaningful and effective rebellion by refusing to pass on the Tory funding cuts. Instead, they didn’t even oppose a rule change at Labour’s conference that banned Labour councillors from voting against cuts budgets agreed by their Labour groups.

How to beat the Tories

However, there was a welcome crack recently in the mainstream media that usually choruses that Labour councillors ‘have no choice’ but to make cuts. The Independent’s website carried an article by a contributor, Matthew Turner, titled: “Forget ‘sweetheart deals’ – this is how Labour councils can beat the Tories at their own game.” Turner asked: “Why should Labour accept the cuts devolved to their local authorities?… It’s time that Labour councils resisted a reckless and failing economic policy by refusing to implement cuts devolved to them from central government.” 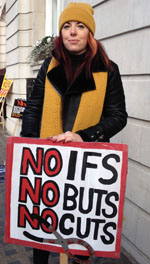 He proceeded to point out that the Trade Unionist and Socialist Coalition (TUSC) has explained that councils could set no-cuts budgets by using reserves and borrowing powers while they build up a campaign for more funding. Such a campaign – especially if it grows to draw from workforces and communities across the more than 110 Labour-controlled councils in Britain – could certainly develop the potential strength to force the Tory government into reverse gear on austerity.

In Surrey alone, after weeks of protests led by firefighters and campaigners in the group Save Our Services in Surrey, which includes Socialist Party members, the county council has reversed a decision to close Staines fire station, the busiest in the county. Successful campaigns like that show on a local scale how mass pressure brings results, a lesson that can be multiplied into coordinated mobilisations nationally.

With the Institute of Fiscal Studies having this month predicted thatausterity will stretch into the 2020s if the government has its way, the building of a mass anti-austerity movement, with the full involvement of the trade unions, is urgent.

A widespread anti-austerity mood exists. Jeremy Corbyn and John McDonnell have a responsibility, along with the trade union leaders, to help to galvanise this mood and lead a mass movement that can defeat the Tory agenda of driving workers’ living standards downwards at a rate of knots. Whether they do or not, struggles against the cuts onslaught will break out in any case, including spontaneous eruptions, as mass anger will spill over into action.