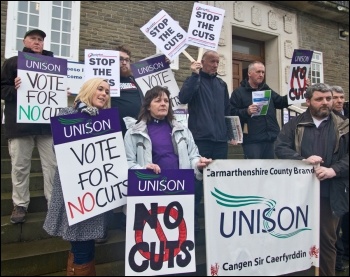 Local authorities in Britain are tasked with meeting local social needs arising from the coronavirus pandemic and its economic consequences. They have never been in a worse position to do so.

Already ravaged by over ten years of austerity, they now face even bleaker financial challenges – unless there is a fightback.

The effects of this crisis, as always, will be felt most by the working class and most vulnerable in our society. This will throw into even sharper relief the failure of the capitalist system to in any way care for those most in need.

Expecting an increase in demands on social care, Boris Johnson’s government used the Coronavirus Act in March to reduce the statutory obligations of councils towards vulnerable adults and children. This was clearly an anticipation of services being unable to cope.

Councils such as Sunderland, Middlesbrough, Birmingham and Warwickshire are among those to have taken measures which mean they will not be obliged to carry out assessments of individuals’ or carers’ needs, or produce detailed care plans.

Over a decade of cuts and privatisation in the care sector has led to the devastating impact of the virus in care homes. Over 20,000 residents and over 100 care workers have died so far in the pandemic.

More than 1,000 care providers in UK now compete to make profit by caring for vulnerable elderly people. The consequences include low wages, poor conditions, lack of PPE and insufficient cleaning.

A fully funded, nationalised care sector, run democratically by workers, residents, and local authorities, would be far better placed to respond in the interests of resident and staff safety.

Warnings from the local government associations in England and Wales about impending financial crises have forced central government to pledge an extra £3.2 billion in funding. But this is not even enough to cover the immediate demands of the pandemic. A Labour Party report has outlined that local authorities are facing a £10 billion black hole.

On top of that loom the effects of a longer-term recession, bringing increasing demands for public services and benefits, and decreasing revenue.

Following the last recession in 2008-09, successive governments set a path towards removing any funding that councils receive from central government in the form of the ‘revenue support grant’. To date, this amounts to the theft of £16 billion from local authorities, and ultimately from working-class communities.

This has led councils to cut jobs and services while seeking to generate all of their own income, largely through council tax and business rates – rather than fighting to get the stolen billions back from the government. Many councils have introduced or increased charges for some services.

And many councils have tried to fill some of the gap through high-risk capital spending – borrowing money to invest in commercial property. Local authorities have spent £6.6 billion for this purpose in the three years since 2017-18, the National Audit Office (NAO) reports.

The NAO warned in February that this leaves councils vulnerable to recession. In fact, all of the measures taken by councils trying to partly fill the huge gap in funding have left them vulnerable to an economic downturn.

Local businesses will struggle to pay their business rates. Increasing numbers of workers will be unable to afford council tax, or find themselves forced to claim Universal Credit, reducing their liability. Charged-for services can expect a reduction in demand. And who will now pay to buy or rent councils’ commercial property investments?

This is not to mention councils’ decimation of their own services, which in the past could have mitigated some of the worst social consequences of poverty.

Local authorities are responsible for a substantial proportion of public spending. They hold the potential for some localised planning of state funding.

Government at a national level has demonstrated its complete inability to respond to the Covid-19 crisis. Local government is one area in which Labour councils particularly could have demonstrated in practice how to prioritise workers’ health rather than bosses’ profits.

In April, Southampton Socialist Party wrote to the leader of Southampton City Council, outlining some elements of that approach. We suggested the council take up a political campaign for more funding from the government, for all workers in the city to receive full pay, and to demand democratic trade union oversight of safety at work and the spending of council resources.

The Labour council could be organising with trade unions to subject all workplaces in the city to regular inspection for safe working practices and sufficient PPE. The city has already seen bus workers organised in transport union RMT refuse to take buses out without safe and adequate cleaning.

And with schools being asked to open to increasing numbers of children, risking an acceleration of the spread of the virus, Labour councils should stand behind school unions like the NEU and Unison.

A number of local authorities have already announced they will not support schools increasing capacity on 1 June. The rest must also announce the schools should not reopen! And these announcements should be linked to campaigns led by school union groups and parents to demand that any return to school must only be on the basis of safe conditions, both nationally and locally, agreed by the workers and parents.

Councils have always been an arena in which socialists could go some way towards demonstrating what our programme means in practice. Liverpool City Council was able to do this under the influence of Militant (predecessor of the Socialist Party) in the 1980s.

By spearheading a political campaign of the working class and trade unions, Liverpool’s Labour council was able to win £30 million from Thatcher’s Tory government. The city created jobs and built thousands of council homes, plus parks, schools and leisure centres.

The current crisis in local government was never inevitable. Labour councils have been working hand-in-glove with Tory governments in implementing austerity.

The Socialist Party has been consistent in campaigning for councils to set no-cuts budgets, that councils should “take the Liverpool road”! It has always been feasible for councils to stop all cuts and invest in services, and use their reserves and borrowing powers.

This would have created the space for individual councils to technically produce ‘balanced budgets’. These anti-austerity budgets could then be used to build public support for a campaign to win back the money from the government, and to coordinate with the other Labour councils around the country.

This is the approach called for by a notable few Labour councillors – such as Southampton’s “rebel councillors,” Keith Morrell and Don Thomas, who were kicked out of the Labour group for opposing cuts. They moved an alternative budget in 2013 with these proposals. They were subsequently re-elected as anti-cuts independents on the basis of support for their militant stand.

The election of Jeremy Corbyn as leader of the Labour party in 2015 inspired thousands with his anti-austerity message. But he and his shadow chancellor, John McDonnell, made a mistake by giving Labour councils the go-ahead to continue making cuts.

This was just one way in which Labour’s right wing was able to undermine Corbyn. While he was speaking out against the cuts, his own party was carrying them out.

As the Socialist Party argued, the Labour leadership around Corbyn should have made councillors and council policy democratically accountable to its anti-austerity membership, and replaced the right-wing cutters with anti-austerity fighters.

The need for working-class, socialist fighters in the council chamber remains. The effects of the pandemic and economic crisis will demonstrate even more starkly than before why services cut over the last decade need to be restored.

Labour councils need to mobilise all of their resources to protect workers, and also to assist trade unions in building a mass movement for full funding for council services – and bringing outsourced areas, like the care sector, back in-house. This means using council powers to invest in working-class communities, and mobilising those workers to fight for the money from the government, ultimately making the rich pay for their own crisis.

Council budgets set in the first few months of 2020 are now likely to need tearing up and starting again. Labour councils should use the opportunity to set new, emergency budgets – anti-austerity budgets – as soon as possible.

These budgets should come from open, democratic local conferences, with the participation of workers, their trade unions, and the local community. They should be used to put forward what is required to keep communities safe in the pandemic and after, as well as to restore services. Most importantly, this could be a step in the process of mobilising people to fight for the return of the stolen billions.

But if Labour councillors are unwilling to put up a fight, then they should step aside for those who will. They can expect to face mass grassroots opposition.

We say to those campaigners and trade unionists that they should prepare to stand independently in council elections next May. This would start to show what working-class fighters can achieve when they adopt a socialist programme, campaigning for our jobs, services and communities.

Show your support for our members at Bristol Water on strike today.

After risking their health in the pandemic, they’ve been given a pay freeze while the CEO enjoys a £300,000 bonus.

It’s not on. Time management got real.

Committee for a workers' International@CwiSocialist·
6 Apr

Ireland: What does the RISE and People Before Profit merger represent? -READ MORE - https://t.co/w2tibd7I4G