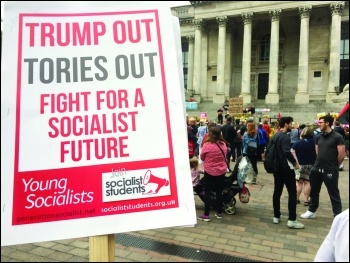 There was anger amongst trade unionists and young people to Trump’s hypocritical visit to take part in D-Day commemorations in Portsmouth on Wednesday, with over 300 turning out to a lunchtime rally in the Guildhall Square. They were joined by a number of people who had come to attend the D-Day event but wanted to join the anti-Trump protest as well.

Trump, like Theresa May, represents the billionaires who have pursued austerity policies that have attacked the lives of D-Day veterans by cutting pensions, benefits and the National Health Service.

Arguments against our protest for ‘politicising’ D-Day were compromised by Trump’s call to open up the NHS to US corporate privateers. A letter signed by leading local trade unionists in PCS, RMT and Unison was published by the Portsmouth News and over 100 protesters signed our letter, many buying copies of the Socialist and some filling in join cards.

Socialist Party regional secretary, Nick Chaffey, spoke at the rally giving solidarity to all those who had joined the protest to oppose Trump’s racism, homophobia and sexism. He appealed to everyone to build a mass campaign calling for an immediate general election, to end austerity and fight for a Corbyn-led Labour government implementing socialist policies to meet the needs of all.

A successful follow-up Socialist Students meeting discussed these questions, with plans being made to step up our fight to kick out the Tories.