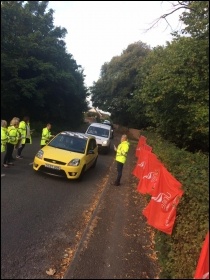 Women working for caterers Baxter Stanley in the canteen at the Fawley refinery (near Southampton) voted unanimously to strike over their derisory 12p pay rise.

Today (1st September) was their third day of four days of strike action.

They leafleted workers arriving at the site. The tailback of cars caused huge delays but it was overwhelming smiles and solidarity as 99% took leaflets and gave their support.

Strikers explained their case to members of the Socialist Party who had come to give their support and solidarity:

“I’ve worked here for over 30 years. We always had a decent payrise, maybe 4%; Baxter Stanley took over the contract eight years ago and we have had 1% or 1.5%. Last year they promised if we accepted 1.5% we’d get a better offer this year. They think we forgot. Well we haven’t!

“They made six workers redundant recently, they haven’t replaced them and now we’re doing the work of two or three.

“Just to rub it in, after they told us we were paid the highest in the area, we found them advertising jobs on higher pay than us. We work hard, we deserve a decent pay rise, they’ve got the money, it’s time to pay up.”