Fight for every job

Thousands of jobs already destroyed. Thousands more announced almost every day. The ‘job retention scheme’ is turning into a jobs haemorrhage as the government starts to wind it down, with a view to scrapping it in October.

Now many profit-rich companies which took the furlough cash are preparing to dump thousands of workers on the dole. The scheme is being revealed as the bosses’ bailout it always was.

As speaker after speaker at the National Shop Stewards Network conference on 4 July said, trade unions must fight every job cut and every pay cut. Workers must not pay for coronavirus.

The Tories have shown they are not acting in the ‘national interest’. They represent the interests of big business looking to protect their profits and make workers pay the price for the new economic crisis – with cuts to jobs, pay, working conditions, benefits and pensions.

The Socialist Party calls for a mass fightback led by the trade unions to resist all job cuts. We have seen thousands join the unions in recent weeks to protect themselves at work.

With a bold lead this deeply unpopular government could be pushed back. That means fighting for clear socialist policies that can unite the working class and offer a way forward to build a socialist alternative to a new economic depression. 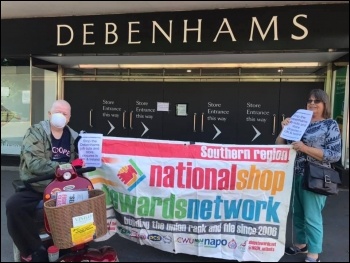 Protesting outside Debenhams in Southampton, June 2020   (Click to enlarge)

We call for the work to be shared out with no loss of pay to ensure full employment. Young people don’t need a few weeks’ ‘retraining’ on make-work schemes, but real apprenticeships on trade union rates of pay. The minimum wage should be immediately raised to £12 an hour – £15 in London.

We need free education and a mass programme of public works to build affordable council housing, schools, hospitals and transport infrastructure. A ‘green new deal’ could create socially useful jobs and protect the environment, but it has to be fully funded, not the paltry sum proposed by Rishi Sunak, and democratically controlled by the trade unions – a socialist green new deal.

The financial books of any company declaring job cuts and closures should be opened to trade union and workers’ inspection, and major companies nationalised under democratic workers’ control and management to defend workers’ jobs.

The coronavirus pandemic has exposed the complete inability of big business and their political representatives to keep us safe and meet the needs of working-class people.

Now the economic crisis is further revealing that the system they represent cannot guarantee us jobs, pay, decent working conditions and public services.

The fight to defend every job must be linked to the fight for a socialist plan of production. This means taking the main industries and financial institutions out of the hands of those interested only in profit, enabling democratic working-class control and decision making over how the economy and society can best be organised to meet the needs of the majority.