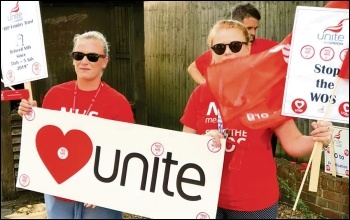 Members of Unite and GMB trade unions, along with community supporters, were out on strike at Heatherwood Hospital near Bracknell (part of the Frimley NHS Foundation Trust) on 18 and 19 November.

The health workers had walked out over being transferred out of the NHS to a wholly owned subsidiary (WOS) company – effectively, privatised.

The mood on the picket line was resolute and defiant, but the strikers cause has not been helped by the actions of Unison union officials who, unilaterally, stopped strike action by their members.

It was reported that the transfer to the WOS has been suspended while discussions take place on a smaller WOS involving management being transferred but not other staff. These discussions have not involved Unite or GMB.

This caused much anger among union members and I was told that many Unison members had joined GMB, including three reps. Meanwhile, the strike continued without Unison.

Unison is wrong to act independently of the other unions as this can only play into the bosses’ hands and weaken the strike.

It’s reported that a meeting will take place on 21 November between all the unions and the health trust. GMB members say that they and Unite are standing firm in opposing the WOS and further action is being planned.