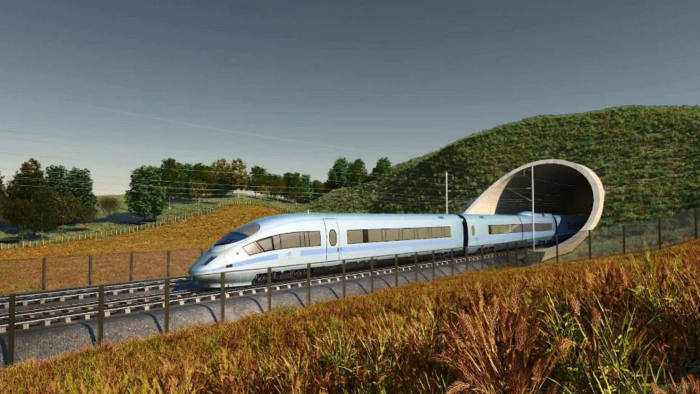 Tory cabinet minister Stephen Barclay has a “gut feeling” that the ‘HS2’ high-speed rail link between London and the north of England will go ahead.

He said this in response to speculation following the general election that HS2 was in danger of being scrapped.

Boris Johnson ordered an ‘independent’ review of the scheme last August. It was so independent, it was led by Douglas Oakervee, former chair of HS2!

But the review’s deputy chair, Tony Berkeley, a civil engineer who was involved in the development of the Channel Tunnel, recommended a severe curtailing of the project in a dissenting report.

Berkeley concluded MPs had been misled about the true price of HS2, and that the outcome of the official review had been “unduly influenced” by the promoters of the scheme, i.e. the big construction companies.

Instead, Berkeley recommended the money saved should be used to improve the commuter network in the North and Midlands, where travel times are even worse than in the south-east of England. Oakervee has admitted that the cost of the entire project could reach £106 billion, almost double the original estimate of £56 billion!

The project claims it will help ‘regenerate the North’, a promise of Johnson’s following the Tories taking seats from Labour’s ‘red wall’ in December.

Yet HS2 is now unlikely to reach Leeds and Manchester until 2040! Is the North expected to wait 20 years for faster national transport links to bring this promised improvement in quality of life?

Throughout the duration of its planning, HS2 has been a honeypot for private construction companies, rewarded by the state with big profits. The needs of ordinary commuters, transport workers and communities have been ignored.

Instead, passengers, transport unions and the wider working class should decide democratically what services are urgently necessary, as part of a socialist transport policy. To do this, we need the renationalisation of transport and genuine planning of services.

New and upgraded projects should be built by a nationalised construction industry, under democratic workers’ control and management, rather than a handful of billionaires.

There is enough wealth and skill in society to provide both – as well as creating decent, well-paid jobs wherever you live.

Cllr Anthony Lavelle (Liverpool City Council) and currently in the running for Mayor of Liverpool, voted in 2018 for Corbyn to resign. The city of Liverpool, who’s population overwhelmingly voted for Corbyn in the 2019 GE are now being offered a red tie Tory as their mayor

Liverpool – the city that fought back.
In the 1980’s Liverpool city council attracted enormous support for its stand against Thatcher refusing to pass on cuts or tax rises. What are the lessons for today?
Wednesday 3rd March 7:00 for 7:15pm start
Message for zoom details

Last night our #Brighton branch agreed to continue to stand in solidarity with #RISE as they demand their funding be restored by Brighton Council
#RiseUp #stopcouncilcuts
25 000 signed petition
Sign here: https://t.co/GmL2QkUKqQ

Find out more at: https://t.co/9ZkgqrW5fH