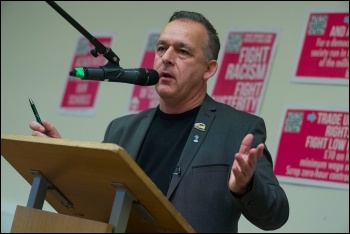 Why is the RMT continuing its strike action on South Western Railway (SWR)?

For everyone travelling late at night or seeking access assistance on SWR it is the view of the RMT that a fully qualified, safety critical guard should be present on every train, working alongside the driver.

For over two years we have attempted to negotiate with SWR to ensure the continuing safety of passengers and staff.

We have suspended action to engage in meaningful talks, only to be strung along with empty phrases. Our members were forced to ballot yet again due to the Tory anti-trade union legislation and yet again have responded with an increased mandate.

It is my view that the RMT should provide a fighting fund to ensure we can take the decisive strike action necessary to ensure a positive result for our safety campaign.

I stood in this election on the fighting traditions of the RMT that has confidence in our members and our willingness to fight for what we believe to be right.

That is what we need more than ever to resolve this dispute with the high-handed management at SWR.

Can you outline the key messages of your election campaign?

As RMT president for three years, I sought to continue the fighting traditions of our union, a democratic, member-led union, prepared to act when our members choose to and to put their resources, the resources of the union, at their disposal.

In the election of my successor, Michelle Rodgers, as president, we established a nationwide campaign of RMT activists across all regions, industrial sectors and self-organised groups to continue that work.

That has been the strength of my campaign, the members who fight for this union and its members every day at work, defending jobs, pay and working conditions.

Our members want a union leadership which is outspoken, visible and as determined as they are to ensure the RMT is a union that fights for them. Words can come easily to us all but it is what we are prepared to do that counts.

We also need to be a union that seeks to work with others to strengthen the trade union movement. To act in solidarity, shoulder to shoulder with those in other unions fighting back.

With six million members, the trade unions are the largest voluntary organisation in the country. Potentially we have a strong voice and enormous power if we act collectively, as we did voting for a general strike at the Trade Union Congress (TUC) back in 2012.

The RMT has to make sure that voice is heard within the TUC, and that the TUC is called on to act in our interests. The Trade Union Coordinating Group, TUCG, that consists of ten national unions, is another body that must be prepared to draw together its collective strength if others are unwilling to act.

We are on the verge of a general election, how do you see the RMT’s political role at this time?

Whether it’s Theresa May or Boris Johnson in No 10, we are fighting the capitalist system and we need to roll up our sleeves and be prepared to fight in the interests of working-class people.

As a socialist trade union, that means the RMT will give support to Jeremy Corbyn’s policies that match our union views on rail renationalisation, the restoration of trade union rights and his anti-austerity manifesto, but we will not support those in the Labour Party that seek to undermine Jeremy and the interests of our members.

I will seek to ensure we play our role to the full.