SWR dispute: It’s a strike to ensure the safety of the travelling public 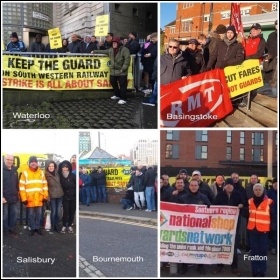 After over 40 days of strike action during the last two years, the RMT transport union reported that a deal had been reached with South Western Railway to retain the safety-critical role of the guard.

However, that deal was then rejected by the company with the RMT believing that government interference has played its part, unwilling to see a victory for the RMT in the run up to the general election, and allow any suggestion that militant action works.

Despite this setback, RMT guards and their leadership on SWR were determined to continue the fight and, on 2 December, began an historic month-long strike to ensure the continued presence of the guard.

Picket lines were the biggest of the dispute so far, spurred on by management bully boy letters sent to the homes of SWR guards threatening to sue them for loss of earnings – a ghostly echo of the infamous 1901 Taff Vale case, when the striking rail workers union was sued by the Taff Vale railway company.

This was seen as an especially cynical ploy as SWR has suffered no losses, being bailed out by the Tory government with public money to the tune of £86 million, even if SWR don’t run trains during the strikes.

While the government has sought to win support from ‘long suffering commuters’, guards report overwhelming support from the travelling public who value the presence of guards. It’s not surprising, since statistics show a sharp rise in violent and sexual assaults on trains in the recent period. What would happen in the absence of guards?

Perhaps in a reflection of the real mood in society generally, twitter feeds were calling for an end to the chaos and for SWR to lose its franchise. Why? Because the overcrowded trains are the norm, not just on strike days!

The RMT recently revealed how the public is being fleeced by privatised rail companies, particularly those that provide the rolling stock – just three monopoly companies have paid out £1.2 billion in share dividends over six years to 2018, enough to pay for 700 new trains.

This is while fares continue to rocket. Some tickets have gone up by 250% since rail was privatised by the Tories 26 years ago. So much for the promise by the then Tory prime minister John Major that prices would fall!

Jeremy Corbyn’s manifesto announcement on the first day of the strike, that his government would cut season tickets by a third, a saving of £2,000 for some commuting workers, and provide free travel for under-16s, will undoubtedly be as popular as his call for the renationalisation of the railways and the guarantee of a second safety-critical member of staff on every train.

From the picket lines

RMT strikers at Fratton in Portsmouth were as determined to see the back of this bosses’ government as they were to ensure their future role. Because after ten years of austerity this fight, like so many others, is a battle for jobs, working conditions, pay and public services over the endless drive for profits.

On the first strike day Andy Mellors, outgoing managing director of South Western Railway, said that drivers should open and close the doors on the train as it improves punctuality. One of the strikers at Salisbury said: “This implied that unpunctuality was the fault of the guards and there is absolutely no proof of that, especially since this would happen on the new trains which were not ready and were untested.”

A striking guard at Bournemouth said: “The RMT and the public were being used as a political football by the government. The Tories would not allow a deal to be made as they were holding out until after the election, and if they won, they would introduce new anti-trade union legislation. This would ensure that a predetermined percentage of trains would run during industrial action. If the unions failed to sign up to this, it would cause the strike to be declared unlawful.”

(thanks to Jane Ward)

“Alongside RMT strike action in the West Midlands, this strike will put the future of transport high on the agenda of the remainder of the general election campaign.

“This historic fight needs the backing of all trade unions. It is a fight for the safety of workers travelling by rail. This month-long strike will hit the pockets of guards hard in the run up to Christmas. The RMT are raising a hardship fund, which we call on all unions to support.”