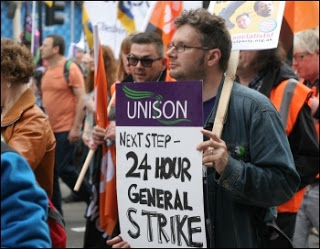 SouthamptonTrade UnionsTUSC
spsr -
November 15, 2012
DEFEND JOBS & SERVICES
VOTE NO TO ALL CUTS
LABOUR MUST REFUSE TO IMPLEMENT CONDEM CUTS
USE THE £70 MILLION RESERVES & BORROWING
FOR A UNITED MASS CAMPAIGN TO OPPOSE ALL CUTS
CALL A CITY WIDE DEMONSTRATION
IMMEDIATE BALLOT FOR STRIKE ACTION
FULL GOVERNMENT FUNDING FOR THE NEEDS OF THE CITY
The
impact of ConDem funding cuts to Southampton Council services makes for ugly
reading. Hundreds of council workers, providing essential services we all pay
for face the sack. Our children, the elderly, the vulnerable and the city as
whole are being asked to pay for crisis they not cause. On top of the threat to
jobs at Fords, without an alternative to cuts the city faces a bleak future.
Unite
Against All Cuts

It is vital a clear
stand is taken to oppose all cuts and unite the city in a campaign for government
funding to provide the services the city needs. Labour must refuse to implement
ConDem cuts and use the £70 million reserves and prudential borrowing powers to
protect jobs and services.
The
economic crisis and the budget deficit was not created by too many nurses
looking after their patients or teachers supporting our children. The banking
crisis, and the bailout of the banks is the bill we are being asking to foot.
This year £6.2 BILLION has been stolen from local authorities by the government
while a handful of super-rich city bankers took £13 BILLION in bonuses. Those
that created this crisis should be the ones asked to pay for it.
Lessons
of Pay Dispute – Action wins

The
defeat of the Tories in May and the restoration of pay was a direct result of
the sustained strike action and the public support built by the campaign
against cuts to pay, jobs and services.
Such
a campaign needs to be built again but linked to mobilizing the huge support of
the city in a massive Saturday demonstration. Support for a council wide strike
needs to be built and linked to co-ordinated strike action with other workers
such as Ford workers.
An
immediate strike ballot must be called and action prepared for. There must be
no delay.
Fighting
Cuts Wins Support

Labour
campaigned in the May elections as an alternative to the Tory council cuts
agenda. The Socialist Party and the candidates for the Trade Unionists &
Socialist Coalition warned that if Labour did not fight the government for the
necessary funding they would face making the same cuts as the Tories.
Fight for
Fair Funding

Not
a single Labour councillor can have stepped forward in those elections with
making these cuts in mind. But no amount of hand wringing or finger-pointing at
the ConDem government will save jobs or protect services. Councillor Simon
Letts said the cuts can not go on. We agree. It is time to take a stand, if not
now when? Labour must refuse to implement the ConDem cuts. A campaign to fight
for fair funding cannot be built at the same time as making massive cuts.
Rebel
Councillors Get Union Backing

So
what if Labour refused to implement the ConDem cuts? Firstly they would be
heroes in the city with mass support. The Tory austerity agenda is widely
rejected. They lost over 20% of their vote in May. Coxford rebel councilors
Keith Morrell and Don Thomas have shown what would happen. They have won huge
support from Coxford residents and beyond with the support of council unions
both locally and nationally.

The
ConDem government has found money for tax cuts to big business and the super
rich. It can be forced to find the money for public services. A mass campaign
uniting the 99% against all cuts, of young and old, workers and the unemployed
would put huge pressure on the government.
Use the
£70 million in reserves

This
is a time for courage. No one should hide behind talk of illegal budgets or the
horror story of ConDem local government minister, Eric Pickles taking over the
city.
The
city council has up to £70 million in unallocated reserves and in addition
substantial borrowing facilities which can be used to avert any cuts in the
coming year. This can provide the time to build the sort of mass campaign
necessary to score a decisive victory over the austerity agenda. Such a stand
breaks no laws and provides no basis for government intervention.
If
the Labour opposition pledged to restore funding to any council which used
reserves and borrowing to protect jobs and services, then the ConDem planned
destruction of essential local services would be derailed.
TUSC
Deputation to Council

On
Wednesday 14 November, Southampton Socialist Party and supporters of the Trade
Unionists & Socialist Coalition made a deputation to full council calling
on Labour to take a stand and refuse to implement cuts.

Replying
to the deputation, Councillor Simon Letts ruled out the use of reserves and
borrowing, without even taking such a proposal to the council’s financial
officer.
No
one can argue that the money isn’t there. Even the Financial Times recently
bemoaned the glut of cash, £750 billion awash in the bank accounts of big
business that lies un-invested. If business will not invest in our future, to
create jobs, affordable housing and decent public services a 50% capital tax on
these resources would be the basis for a transformation of the stagnant
economy.
In
2011 thousands marched on March 26 and millions struck on November 30. Mass
demonstrations in the city, sustained strike action with overwhelming public
support saw the Royston Smith, Tory cuts agenda defeated. 2012 has again seen
mass demonstrations and strike action against austerity.
Prepare a 24 hour general strike

A
fighting stand in Southampton, uniting council and Ford workers with the city
as a whole, would receive huge support and solidarity nationally. With the
support of RMT, POA and UNISON delegates, the TUC has backed the call for a 24 hour general strike.
UNITE General Secretary, Len McCluskey, called for a show of hands in support
of such a call at the TUC demo on October 20 and was met with a sea of hands.
Support is growing to name the date for such action.
Now
is the time to take a stand. Southampton faces the fight of our lives. It is
essential to build support for such a fight amongst council workers and our
communities. If you are opposed to cuts and support the ideas we are
campaigning for, join us.
Southampton Socialist Party
Meets Thursdays, 7.30pm
Avenue Campus, Highfield Road,
Southampton
All Welcome
For more info contact
Nick Chaffey on 07833 681910
www.socialistparty.org.uk
Trade Unionist & Socialist Coalition
www.tusc.org.uk
#CutsLabourSouthamptonTUSCUnions