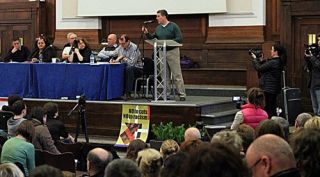 Trade Union activists from across the Southern Region attended the trade union activist conference called by PCS Left Unity to discuss and organise how to build the campaign in defence of pensions and the fight against cuts. Over 600 activists attended.

All the left union organisations in PCS, Unison,
NUT, Unite, UCU were present and agreed to take part in a Temporary
Co-ordinating Committee to work across the unions to ensure that the
governments’ pension deal is rejected and a new strike date is set.
The conference unanimously backed the call for a coalition of the willing to organise further action if the TUC fails to deliver on Thursday 12 January. PCS leaders pledged to convene an urgent meeting following the outcome of the TUC meeting.