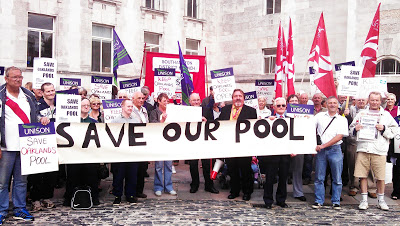 With local council elections today Thursday, 2ndMay, Coxford anti-cuts councillor Don Thomas has decided to stand down and we should pay tribute to the contribution he has made. The fight to save Oaklands swimming pool with the support of the local community and council trade unions, taking up all issues of importance to local people, showed what is possible.  It is important his and Keith Morrell’s tradition is carried on, and that is why I am standing in the election on Thursday.

We have knocked on hundreds of doors and listened to what concerns Coxford residents; the need for council housing with over 8000 on the waiting list to tackle homelessness and growing poverty with the use of food banks.

While our needs are ignored by the council, £60m has been borrowed to invest in commercial property, some as far away as Peterborough, at a time when shops like Debenhams are closing their doors or negotiating rent and rate reductions to stay in business. Local coffee shops in Guildhall Square and restaurants nearby have just closed. More and more student accommodation with fat profits to developers, but where is the family housing?  Council land is being sold off to private developers – Townhill Park – old Town Depot on the water front. The Oaklands school site – derelict for years, should be used for council housing. We need to rebuild our youth services.  Southampton has no youth services run by the council – only church and charities.  All youth and family centres have been closed.

A recent newspaper article highlighted the increase of youth crime following the loss of industry and job opportunities – we have lost Fords, Vosper Thorneycroft, Pirellis, the docks – replaced by zero hour, minimum wage, temporary employment, lack of apprenticeships and training.

Home care services are in crisis and failing to meet our needs, all private and cost £15 per hour.  We gave our full support to residential care campaign to keep the last two Southampton homes open – Glen Lee and Holcroft House. Whilst Holcroft has been saved Glen Lee is set to close.

It is privatisation that is destroying these services. BUPA care home in Northlands House, was a council care home, now pay just £1 annual peppercorn rent, in return for placing some council funded residents. Northlands has 101 beds.  The website looks great but I spoke to a Coxford resident whose brother is at Northlands House. They are upset by the care he is receiving.  He hates it there and would like a room with access outside, but these are for premium residents only. He sees different staff all the time with no continuity of care. This is not good enough. I know a paramedic who visits Northlands when an ambulance is called, very often no-one who knows the person who has fallen in any detail.  Not surprising when there are 101 residents, it is bound to be impersonal, without enough staff, no wonder with BUPA run for profit.

We urgently need an improved bus service. We used to have a council owned bus service with a bus station.  Now we have at least 4 bus operators chasing each other across limited routes in the city, with evening and weekend services restricted. With rumours that First Bus is in trouble and liable to leave Southampton, the opportunity is approaching for the council to step in and restore a council run bus service.

Everyone rightly complains at the potholes and the state of our roads, with Southampton one of 5 most air polluted cities in the country.

There is a common thread – all our services have been systematically closed, handed over to volunteers or privatised to property developers and profiteers.

You can understand it from the Tories, that’s their business model, but not from a Labour council

But the council says there is nothing they can do but pass on the cuts to us, the local people who need those jobs and services.  Basically they say that Labour cuts are better than Tory cuts.  A recent union campaign poster said “Workers don’t feel better about a labour council making them redundant”.

The Council’s own figures tell us that they have cut £136m and lost 1,000 jobs over the last 7 years in response to the Tory’s squeeze on local government.  And now tell us that a further £15m and 134 jobs will be cut by 2020/21 and more beyond that. This is a devastating blow to local families already driven to the edge.

They also intend to run Sure Start with volunteers and privatise the Looked After Children Service.  The social care budget is to be slashed by £4million.  At the same time council tax is to go up by 3%, and reserves were increased by £4m due to underspending.

There is a crisis in our schools too. But one campaign and one school have shown what can de done if a determined campaign is waged. The National Education Union and Southampton Fair Funding for All Schools at Valentine Primary school have ensured the council have fund funding to prevent further cuts over the next two years, an historic victory that should be extended to schools with deficits across Southampton.

Instead of making further cuts, Southampton Labour Council should set a legal, balanced, no cuts budget using its reserves and borrowing powers and build a campaign for the return of our stolen £136m from the Government. We want our money back and must link up with the trade unions and our hard pressed communities to mobilise to fight for it.

The Council should also link up with the 124 other Labour Councils, who have combined usable reserves of £14.2 billion, there is nothing to stop them creating a solidarity fund where reserves are pooled across different councils and cuts prevented.

Such a stand would gain huge public support locally and beyond and put enormous pressure on this weak and divided Tory government.  Austerity is a political choice, not an economic necessity.

And there will be consequences – If Labour councillors continue to say that nothing can be done, then they must expect to be challenged at the local elections by those prepared to fight.

Nationally the government of Theresa May hangs by a thread.  We could have a general election at any day and it would seem likely that a Corbyn-led Labour government could be swept to power.  But it raises the question of what sort of labour government, and what problems will it face? From the start it would be a government of crisis.  Even the modest programme they put forward at the last election will be met with outrage by the Tories, big business and the establishment, using the full force of the media, aided and abetted by the many in the parliamentary labour party.  It is outrageous that Tom Watson, deputy leader of the LP is organising a new party within the party calling it Future Britain Group, seen as a direct challenge to Jeremy Corbyn.  He has been emboldened by Jeremy Corbyn’s constant compromising with his right wing and attempting to unite the party.  But they will never be reconciled to Corbyn, the socialist ideas he has been putting forward, and the raised expectations of the working class people who may usher him into 10 Downing Street.

That is why we need elected representatives who will hold their feet the fire, to defend that programme and fight to carry it out.  It is a practical question – Corbyn can only stand up to the pressures that will rain down on him if a mass movement is built to fight for it.  We know that big battles loom ahead, because for all Theresa May says that austerity is coming to an end, the problems of the system are not resolved.

On the other hand, the rich have never been richer, only 8 wealthy men control over 50% of the world’s wealth.  The capitalists will always seek to preserve their profits and their system at the expense of working people – it’s not a matter of spite, or callousness although they are spiteful and callous, but the iron logic of a system based on private profit.

That is why I am a socialist, I want to see an end to endless poverty, homelessness, the food banks, and most of all our young people robbed of a secure and prosperous future – which is entirely possible if we plan our resources democratically based on society’s needs.

Our battles today are part of that process.  If we organise and fight we can win.   Please join our campaign and vote for the principles that Keith and Don stand for and vote for me on 2ndMay.