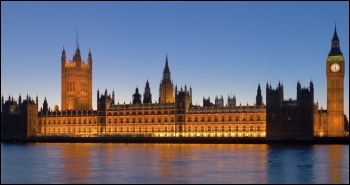 MPs have voted themselves another pay rise, photo by Diliff (Creative Commons)

18% worse off. The Institute for Fiscal Studies calculates that UK households will have living standards 18% lower by 2021 than they would have been had the economic crisis never happened.

Doesn’t this sound like a punishment for working class people? Meanwhile the bankers who caused the crash have pay that is soaring.

And MPs who handed public money over to them – while imposing ruinous pay restraint on public sector workers –are awarding themselves an extra £1,000 a year.

MPs clearly think they deserve rewarding for carrying through the bosses’ austerity and privatisationprogramme.

Of course, most MPs see themselves as representatives of the capitalists, not the workers who elected them. Every pay rise takes them further away from the experiences of the ordinary people who they claim to represent.

Where the Socialist Party has had MPs, they have only taken the average wage of a worker in their constituency.

Dave Nellist was a Labour MP from 1983-92, and a supporter of Militant, the Socialist Party’s predecessor. He gave over half of his salary to the movement, to live on the pay of a sheet metal worker. Pat Wall and Terry Fields made similar sacrifices. And our sister party in Ireland has MPs today, with the same policy.

The only way we can improve living standards for the majority is to put the 99% in charge. Elected politicians should be subject to recall by those who elected them. There should be no material privileges for being an MP.