National Strike Action to Save the Transit 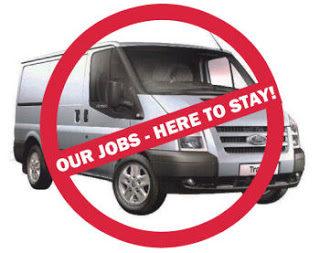 Britain
spsr -
October 25, 2012
The unions must launch the biggest ever fight to defend the future of Southampton.
All Fordworkers are effected by this. Closure here would mean job cuts at Dagenham and across the component industry. It would reduce the national Ford workforce to 11 000 when it was 50 000 in 2000. This would make the UK operation vulnerable to closure possibly by administration as with ex-Ford, Visteon plants in 2009.

A clear message must be sent to the company and the union that any threat to close Southampton will be fought. Union policy is to trigger a national dispute over a closure threat. The ballot must start immediately. To build support for action a national shop stewards conference must be called across the car industry. The Genk plant in Belgium is also under threat with the possible loss of 4 300 jobs, a message of support and solidarity to the unions there will show we stand united.
The future of the city is at stake. Lets not go the way of other cities where plants have shut without a fight and workers and their families have been cast into a future of low pay and non-union conditions.
Open the Books – Where’s the profits gone?
For decades Fords have made monster profits out of the Transit workforce in Southampton. Let’s see where the money has gone. If Fords say they have no use for the factory in Southampton and threaten jobs elsewhere, we should campaign for the nationalisation of Fords as the only way to secure the future of jobs and production.
• A City Wide Demonstration
• An immediate ballot for a national One Day Strike of all Ford workers
• Organise a national car industry wide shop stewards conference
There must be no delay. We must show how serious and determined we are to defend our jobs and the jobs of future generations. Vospers, BATs, Pirellis and Martinis did not fight and closed. What have we got to lose?
City Wide Mass Demonstration
A call across the city to demonstrate for the future of the plant will get an echo and put thousands on the streets. This will show Fords they cannot get away with closing the city.
National One Day Strike
This must be backed up with a national one day strike if Fords fail to withdraw the closure threat. Strike action will boost the confidence of Ford Workers that a fight is possible and show the company, closure will not be easy for them. Such action will receive enormous support from workers across the country and ad momentum to the call for a one day general strike against all cuts and the ConDem austerity agenda.

“The TUC has agreed to consult on the practicalities of a general strike. Let’s start right here – if you are in favour of a general strike, raise your hands.” shouted Len McCskey, general secretary of Britian’s biggest union UNITE. The massive crowd assembled in Hyde Park on 20 October roared its approval and raised its hands en masse.