No to Boris, No to Hunt! General Election now! 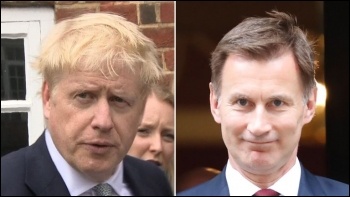 Both millionaires, Johnson and Hunt, have long track records of voting for and implementing massive cuts

We need a general election, not a no-choice coronation of Boris or Hunt. What do they offer that is any different to the brutal austerity policies of May and Cameron?

Both millionaires, Johnson and Hunt, have long track records of voting for and implementing massive cuts.

By ditching May, the Tories pray they can revive their fortunes. But neither Tory candidate has a policy to overcome the party’s fatal divisions over Brexit.

One Tory MP told the Financial Times that frontrunner Johnson “can either try to form a unity government or a headbanger government, he can’t do both.” The divisions in the main party of big business and the super-rich are hopeless!

The only thing holding them together is fear of a general election, and a Corbyn-led anti-austerity government. That government could be pushed by workers’ anger after a decade of austerity to reverse cuts and privatisation, and restore wages, pensions, benefits and public services.

The pain of austerity has been inflicted on young and old to benefit a tiny handful at the very top of society. If you’re poor in Britain you are likely to die nine years earlier than the wealthiest.

It was Jeremy Corbyn’s anti-austerity manifesto in 2017 that united young and old against a background of division over Brexit. At the time it was the Socialist that boldly declared “Corbyn can win with socialist policies!”

It is a fight for these policies that can ensure not only a general election now, but a majority Labour government. That must include ousting the Blairite saboteurs and their failed Tory-lite policies.

In Scunthorpe at British Steel, in Swindon at Honda, in Bridgend at Ford, workers and their families fear for their future as the capitalist crisis puts the thirst for profits before the needs of our communities.

The Socialist Party argues for socialist nationalisation to protect jobs and utilise the skills of manufacturing workers to develop an economy that meets the needs of working-class and young people and the environment.

Despite their divisions and despite their unpopularity, the Tories will not willingly hand over the keys to Number 10. Corbyn needs to step up the fight with a bold, socialist manifesto, and mobilise the working class and trade unions to demand an immediate general election.

The RMT union’s five-day strike of train guards on South Western shows workers are prepared to fight. Rallies, demonstrations and coordinated strike action are needed to build a movement to sweep away the Tories and this rotten capitalist system.