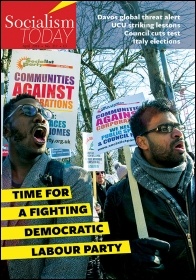 The editorial of the April edition of Socialism Today, No.217

The age of austerity has claimed its first failing local authority. In February the chief financial officer of Northamptonshire county council declared that it was at risk of spending £21.1m more in the 2017-18 financial year than the resources it had budgeted for.

Issuing a ‘Section 114’ order – the first in Britain since the 1990s – all new unbudgeted council expenditure was barred.

At the start of the year, after the council leadership had appealed to Westminster for support, a government inspector, the notorious former hatchet-man chief executive of Hackney council ‘Mad Max’ Caller, had been sent in to examine the authority’s financial management.

In March he reported back, recommending that Northamptonshire be broken-up into two authorities by 2020 and commissioners appointed in the interim, as “living within budget constraints is not part of the culture” of the existing council.

Northamptonshire is the first council to become technically insolvent, but it won’t be the last. The National Audit Office (NAO) reported in March that councils in England had overspent their services budgets by £901m in 2016-17.

They had financed this from reserves which, the NAO warned, “is not financially sustainable”. One in ten local authorities with social care responsibilities, the NAO calculated, will have exhausted their reserves within three years if they keep using them at the current rate.

Northamptonshire is Tory-led and there is speculation that they made the initial appeal for government help in the expectation they could repeat last year’s success by Surrey’s Tory council in embarrassing their ‘friends in Westminster’ into handing over extra funds.

This time, however, the local Tory MPs viciously denounced their councillor ‘colleagues’. The Caller report, arguing that other councils had managed to slash their spending, pointedly said that a cash injection would “effectively be a reward for failure”.

This ‘managerial competence’ line was echoed, unfortunately, by Labour councillors. The Northamptonshire Labour group leader said the Section 114 order was ‘not a surprise’.

But this monumentally misses the point. Councils are in crisis. The NAO report argues they have suffered a 28.6% real terms reduction in spending power since 2010-11.

And there is more to come as the Tories move towards the abolition of centrally-distributed revenue support by 2020, with councils retaining business rates to (inadequately) compensate.

There is no managerial solution or ‘dented shield’ strategy available to stop this return to a pre-Poplar council model of largely self-funding local government – and everything it will mean for public services. There is no alternative but to fight.

But can councils, the local state, still be used by the labour movement to fight back? The Northamptonshire experience does illuminate the position of local government in the British polity.

Unlike the US, where autonomous city administrations can and do go bust, council finances are implicitly underpinned by the government, for example through the Public Works Loans Board.

But that relationship confers quasi-legal powers onto chief finance officers (CFOs). It was not the government that halted all new expenditure in Northamptonshire with the Section 114 notice but a council employee.

But doesn’t that confirm the argument made by many Labour councillors to justify their acquiescence with the austerity agenda, that officers can instruct councillors to cut spending if, as in Northamptonshire, they deem a budget to be unbalanced? Building on the struggle of the Militant-led Liverpool city council in the 1980s, the Trade Unionist and Socialist Coalition (TUSC), in which the Socialist Party plays a leading role, argues for a strategy of using prudential borrowing powers and reserves to formally ‘balance’ no-cuts budgets to buy time for a mass campaign for government funding. Could this also be blocked by council officers? Does Northamptonshire show that there really is nothing that councillors can do to resist austerity?

No, it doesn’t. For a start, Section 114 notices are not unchallengeable. A council meeting has to be convened to consider them but has the power to adopt alternative policies – at which point, as guidance from the Chartered Institute of Public Financing and Accountancy (CIPFA) coyly puts it, “the CFO may need to consider whether or not a further report is required to address the situation that then exists”, or whether her/his statutory duty “has been completed”.

Not unimportant here is the fact that councils no longer face the restrictions introduced in the late 1980s, after the local government struggles under Thatcher, on their ability to remove obstructive senior officers.

External auditors too, unlike the 1980s, are also now dismissible by their council ‘clients’. They have interventionary ‘advisory notice’ powers but these are also challengeable (and surcharge penalties were abolished in 2000).

This is an unintended consequence of the Tory policy since 2010 of devolving the responsibility for austerity to councils under the banner of ‘localism’, confident that Blair’s pro-capitalist New Labour party councillors wouldn’t use the powers they were being handed in order to fight back.

Local austerity will not be defeated by action in the council chambers alone but by combining such defiance with building a mass movement.

A Tory council was never going to do that. But the possibilities for resistance have certainly not been disproven by Northamptonshire.

A matter of political will

The departing Northamptonshire council leader, Helen Smith, lamented that “you cannot win” if the “machinery of government turns against you”.

However, it would be an entirely different matter to take on even just a handful of Labour councils that were refusing to implement austerity policies, mobilising popular support in a national campaign against council cuts.

And if Jeremy Corbyn and shadow chancellor John McDonnell promised that an incoming Labour government would replenish council reserves, pay-off any borrowing local authorities made to stop implementing cuts now, and cancel parasitical PFI debts, splits could open up even among Tory councillors!

The Labour Party in local government is not powerless. There are 124 Labour-led councils whose combined spending is greater than the state budgets of 16 EU countries.

They are a potential alternative power that could contribute to the bringing down of Theresa May’s ‘weak and wobbly’ government.

But local government, along with the Parliamentary Labour Party, is still very much a redoubt of the Blairites.

The cuts budgets that Labour councils have agreed this year are the third set they have made since Jeremy Corbyn’s election as leader in September 2015.

This alone justifies TUSC’s preparedness to selectively field candidates in May’s elections, not against Corbyn supporters but against Blairite cutters.

It is also a warning of the role these defenders of capitalism within the Labour Party will play under a Corbyn-led government.

The actions of the Blairite councillors are a concrete refutation of the idea that Labour is ‘united against austerity’.

Supporters of Jeremy Corbyn’s anti-austerity message undoubtedly want to stop the cuts. But if ‘Labour’ public representatives cannot unite to defy municipal finance officers, does that not show they will not be united in defying Bank of England officials, the IMF, the CBI – or judicial challenges to Corbyn’s policies – when Labour is in government? The policy of appeasing the Blairites must end.

Since the massive surge in support for Corbyn at the general election Labour’s right have had to bide their time, only occasionally breaking cover to attack him, as in the Russian spy nerve agent attack affair.

This situation has allowed Corbyn supporters to make incremental gains within the Labour Party, on Labour’s national executive committee for example, or the replacement of the Blairite general secretary Iain McNicol.

But there are still many profound political and organisational steps to be taken, as examined in Hannah Sell’s article on page 14, before Labour is transformed into a genuine anti-austerity, working-class, socialist party.

That includes passing the council cuts test. Northamptonshire’s collapse, a foretaste of what is to come, should be the signal for Jeremy Corbyn and his supporters to convene a national conference after the May elections of anti-cuts councillors, local government trade unionists, and community campaigners, including from TUSC and the Socialist Party, to organise around the clear and simple demand: no more cuts budgets by Labour councils!