P&O: Defend every job – nationalise the ferries under workers’ control and management! 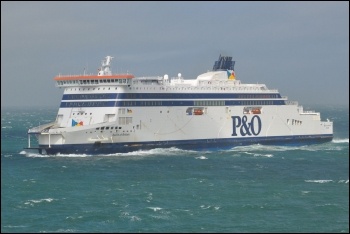 On 11 May, P&O Ferries announced plans to cut 734 jobs in Dover and 122 jobs in Hull, after reporting a severe downturn in demand.

The cuts, affecting more than a quarter of the group’s workforce, come after the firm’s owner, the Dubai-based DP World, had asked for £150 million of government handouts. This was only two months after DP World said it would be paying its investors about £270m in dividends.

The RMT transport and maritime union is determined to fight P&O’s threat, and is currently in negotiations to oppose the threatened job losses. But negotiations never run in a straight line.

The response by the union to a breakdown in negotiations was to call simultaneous demonstrations at the Dover and Hull ports. But at the eleventh hour the demonstrations, backed by both South East Kent and Hull trade union councils, were called off due to some progress in the redundancy consultation which ends on 24 June.

Faced with 1,000 job losses, the question in the minds of P&O workers in Dover and Hull is how to defend jobs, pay and conditions.

The threat of compulsory redundancy, together with enhanced redundancy pay of two-and-a-half weeks per year of service, and the waiving of the restriction of one years post-termination date, may tempt some workers, but the likelihood of finding further employment in South East Kent is unlikely given the Covid-19 pandemic.

P&O should step back from its plans to sack workers and remember that seafarers have a proud tradition in defending jobs and conditions.

P&O workers need to draw on the valuable lessons of the bitter year-long strike in 1988, which linked seafarers internationally against the attacks on job losses, and recall the words of Bob Crow, the late general secretary of the RMT: “If you don’t fight you will lose but if you fight you may win”.

On Mon, courts restart evictions but no end in sight for the pandemic. We demand of govt & housing assocs: No evictions; Help those in arrears; Build council homes.
#NoEvictions - Pls RT for a Twitter storm.
@CommonsHCLG
@RobertJenrick
@unite_southeast
@UniteHousing

Committee for a workers' International@CwiSocialist·
7 Jul

The Real State of German Capitalism and the Class Struggle https://t.co/dtSRu0SHZf