Priced out of Pride 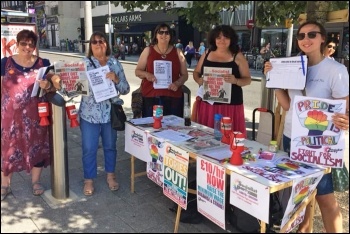 Southampton Pride has grown year on year. The parade on 24 August was a huge spectacle, greeted by cheers and clapping from shoppers in the streets we passed. But behind the party atmosphere is a growing resentment at the direction this event has taken.

It was the trade union council that originally got the event started four years ago. But the trade union banners are now well and truly side-lined in favour of corporate sponsors like the cruise liners, Ikea and Sainsbury’s.

We parked the ‘Pride is Political’ Socialist Party stall outside the main entrance, as like many other groups we couldn’t afford the hundreds of pounds to set up inside.

We attracted those who wanted to talk about cuts to local services and how this affects LGBT+ people. We heard stories that made it very clear that the fight for LGBT+ rights is far from over as the organisers and their corporate sponsors would have us believe.

At our public meeting the following Thursday a number of groups and individuals attended interested in a much more political Pride here in Southampton. They spoke of their anger at being ignored by the event organisers.

It was pointed out that from the Pride stage gushing thanks were given to the big companies investing in the parade but, shockingly, local groups and charities were shunned, with no mention of the valuable work they do.

Those attending from the local support group, Chrysalis (which provides lifesaving counselling and support for Trans people), felt it had become an event organised by

almost exclusively white gay men interested in having a party.

We discussed the history of Pride and how the New York City Stonewall riots in 1969 did not happen in isolation but at a time when collective struggles like the civil rights movement, the Black Panthers, and the anti-war movement were at their height.

The miners’ strike of 1984-5 in Britain was also seen as a turning point in the struggle for support for LGBT+ rights; when the solidarity of ‘Gays and Lesbians support the Miners’ was then reciprocated by the support the National Union of Mineworkers gave them through the Trade Union Congress and the Labour Party.

The common enemy – an anti-working-class Tory government – was recognised by many different sections. It should be the same today. We must take every opportunity to draw all sections of workers together to oppose this unelected and hated Tory government. It’s often LGBT+ people who are hit hardest by austerity, homelessness and the housing crisis, cuts to health services, particularly mental health services; not to mention the harassment and discrimination LGBT+ people still suffer.

There was much discussion of setting up an alternative Pride to reflect the struggle we still face and the real diversity of our movement. But it was also felt we should have a political presence on the parade and keep up the pressure on the event organisers to recognise that many people want and need more than just a party once a year.

We will give our support to all those who have been priced out of Pride so that together we can have an event that truly reflects our diversity and the struggles ahead.