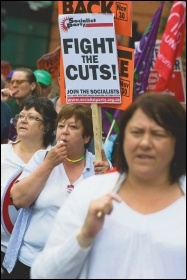 Reading Borough Council plans to privatise many of its key services. Bins, parks, road maintenance, housing benefit payments and council tax support are all at risk.

It is threatening to restrict the free bus pass for disabled people and their carers. If it gets away with this, museums, libraries and adult education could be next.

As far as council workers and service users are concerned, it will mean suffering with job cuts, worse terms and conditions and even more decimated services. This is on top of £20 million cuts a year because of the Tory government’s attacks on local authority funding and the failure of the Labour-led council to fight these cuts.

However, in what might be a sign that the council is under pressure not to carry out these proposals, it has extended the consultation period until 14 September.

A reversal of all the cuts is needed. It is the national policy of local government trade unions Unison, GMB and Unite for councils to set no-cuts budgets. Reading Council’s last financial statement said it has over £28 million in reserves and that to borrow £20 million would only cost it £1.5 million a year.

On this basis the council could set a legal no-cuts budget which would be popular, especially if it included building real, affordable council homes, restoring services, increasing the number employed with trade union rates of pay, terms and conditions, and job security for council staff.

Labour’s general election manifesto promised an immediate £4 billion injection to local government and a review of council finances. Corbyn should pledge now that any council prepared to stand up to the Tories and implement a no-cuts budget would have the funding restored on day one of a Corbyn-led government.

If the councillors addressed the council workforce with the above programme it would have mass support among council workers and the wider working and middle classes. If councillors are not prepared to fight on such a programme then working class people could support standing anti-cuts council candidates that will.