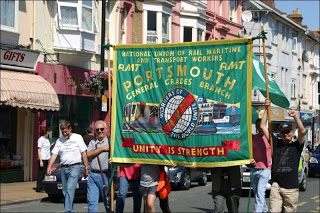 Reinstate Wightlink RMT Rep, Paul Kelly!
No to Victimisation No to Anti-Union Bullying

On 11/11/2011 RMT representative Paul Kelly was dismissed by Wightlink Ferries on inflated charges. This is a transparent attempt to victimise an effective and popular trade unionist.
To defend its members and reps from such attacks the Portsmouth RMT branch is balloting for industrial action. •    The immediate reinstatement of RMT Rep Paul Kelly•    An immediate end to the victimisation, bullying and attempted intimidation of trade union members by the management of WightLink Ferries•    A transparent investigation into how a manager can use the company’s disciplinary procedure to carry out a vendetta against a union rep

Paul Kelly is active RMT rep who has continually fought for the rights of the members he represents at Wightlink Ferries.
Paul played a leading role in a campaign against the imposition of rosters, while highlighting management deficiencies which led to the intervention by the Maritime and Coastguard Agency on safety grounds.
When responding to a call for emergency mechanical assistance by a ships captain Paul was seen without Personal Protective Equipment. An initially reasonable response to this minor incident, with informal advice accepted by all involved, was suddenly escalated into an all out attack on Paul when the manager decided to instigate a formal misconduct charge.
It appears to be no coincidence that the manager escalating the charges is the same manager who Paul protested against over the roster imposition. This vendetta has prejudiced the case against an effective and successful trade union representative.
After a fact finding interview the investigation officer suddenly pursued a different allegation not previously identified, even though it lacked any supporting evidence in the statements of 5 staff who were interviewed regarding the first allegation.
This second allegation was unfairly used to charge Paul with gross misconduct even though all other witnesses refute the charge.Paul Kelly was dismissed 11/11/11

In response the RMT branch are balloting for strike action and demand the immediate reinstatement of Paul Kelly, the return of his leave period and a transparent investigation into how a manager was allowed to use the disciplinary process to carry out a vendetta.
RMT General Secretary Bob Crow said:“Paul Kelly’s case is one of the most blatant examples of victimisation for union activities that you will ever come across. Once again the RMT finds itself having to defend an elected representative , whose only real crime was to continually defend the members he represents”