For Whom the School Bell Tolls: Our kids or the Tories?

For Whom the School Bell Tolls: Our kids or the Tories? 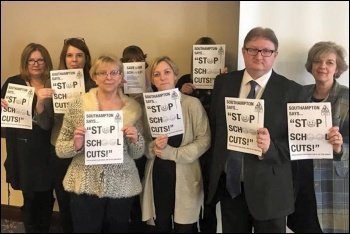 Fighting school cuts in Southampton, photo by Southampton Fair Funding for All Schools

Like the NHS and council services, public state education in primary, secondary, special schools and colleges is facing a dire crisis, with serious consequences for children whose ‘one chance’ in preparation for life is under threat.

A sustained pay freeze and intense workloads have caused a teacher recruitment and retention crisis. Curriculums under a ‘high stakes’ testing and league table regime are seeing PE, music and computing scrapped for a narrow focus on reading, writing and maths.

Stalking the towns and cities of Britain are the academy chains, gobbling up the state sector and building private empires of overpaid management at the expense of children’s education. Like other public services, great gains for the working class that ensured greater equality in society, education is now just one more source of profits in an increasingly marketised and privatised system.

The figures are alarming. Education spending as part of GDP is at the same level as the 1960s. £2.8 billion has been cut in education since 2015. Teachers and teaching assistants are being cut to balance budgets.

With pupil numbers rising, so are class sizes. The National Education Union (NEU) highlighted: “The latest School Cuts research – drawn solely from government figures – shows that staff numbers in secondary schools have fallen by 15,000 between 2014-15 and 2016-17 despite having 4,500 more pupils to teach.”

Schools are going bust, with over 25% of secondary schools in deficit according to the Education Policy Institute, up by a third since 2015. Last year the government›s figures showed there were more than 9,400 primary schools which had been in deficit in 2015-16, more than a third of the total.

And 80% of academies, the golden balls of Tory and Blairite education policy, are in deficit with their accountants saying they will go bust within two years. Was Carillion just the first brick to fall?

The ‘choice’ now facing local councils, schools, teaching unions, parents and students is accept the cuts or fightback. Rumblings of opposition were felt in last year’s general election where education cuts dominated the debate and forced a £1.3 billion ‘retreat’ from the Tory government.

With the May local council elections now in sight, what can Labour councils do to ensure school budgets are protected, cuts are halted and a mass movement is built to ensure schools get the required funding? Firstly they should make clear their full support to all education unions and parent campaigns, and show their solidarity with the NEU day of action on 21 April.

But most importantly they should turn their words of support into deeds by utilising council powers to stop school cuts. Under legislation from the Department for Education – ‘Schemes for Financing Schools’ guidance – local councils have the powers to issue ‘licensed deficits’ for up to three years.

These can be used to allow schools to resist making cuts, while Labour councils, education unions, parents and students build a mass campaign to demand the Tory government restores education funding.

In the meantime councils can use reserves and borrowing powers to ensure schools are fully funded, with the clear commitment of an incoming Labour government to restore funding and eradicate the deficits and borrowing used to protect schools. What possible reason could there be for Labour councils not to use these measures?

Such a campaign could lay the basis for a national education strike if the Tory government refuses to budge. In the face of a 60-hour working week and a pay freeze, NEU members are calling for a 5% pay rise, fully funded by the government and fought for with a campaign of strike action.

Already in London and other areas, school strikes have challenged academisation and the effects of cuts. As calls from nurses to reject their pay offer grow, there is the renewed possibility of cross-union strike action coordinated by the Trade Union Congress (TUC).

Under the banner of the demand for an immediate general election, such action could sweep the Tory austerity government from office. Surely the best way to make the urgent change schools and children need.

These are the demands that the TUC should march under on its 12 May anti-austerity national demo. As voters arrive at the ballot box in May, they should be given a real choice to vote for candidates prepared to fight education cuts and who will refuse to carry out austerity.

Despite the enthusiasm for Jeremy Corbyn’s anti-austerity manifesto, his Blairite opponents, many of them councillors, continue to vote through Tory cuts. Those Labour councillors who fail to fight and force schools to carry out damaging cuts should be challenged at the ballot box by Trade Unionist and Socialist Union (TUSC) candidates who are prepared to fight back.