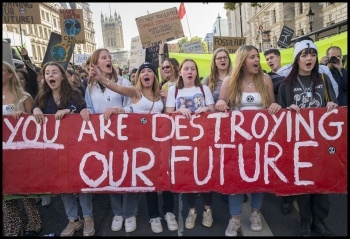 On 20 September four million young people and workers around the world took to the streets to strike and protest against climate change. A few days later Greta Thunberg berated the “empty words” of the world’s leaders at the UN climate summit who are “failing” young people.

A report from investment data company Arabesque S-Ray has revealed that 80% of the biggest 200 companies globally are unlikely to meet targets set out in the Paris Climate agreement of limiting rising temperatures to 1.5˚C by 2050. 30% of them don’t even disclose what their greenhouse emissions are.

Addressing the environmental crisis was placed at the top of the agenda for this year’s Labour Party conference, with 128 motions calling for a Green New Deal.

The Green New Deal refers to the New Deal, a programme of state-backed investment in 1930s USA implemented in order to respond to the crisis of the Great Depression. It’s popularity shows the growing understanding that the investment needed to develop green technology is not going to come from the capitalists.

Billions of pounds that have been pumped into the bank accounts of big business since the start of the economic crisis – with the aim of stimulating investment – still sit there, uninvested. They will only invest when they think that a profit can be made.

A Green New Deal and a large-scale programme of state-backed investment could start to bypass the role of the parasitic capitalists. But to remove the parasites completely requires wealth and industry to be taken into public ownership and under democratic workers’ control. This includes the nationalisation of the banks. Workers should not be the ones to pay for an environmental crisis caused by the bosses.

Capitalism’s chaotic market is incapable of the planning required to coordinate the steps needed to solve climate change. Workers and the trade unions have a central role to play in developing this plan. There has been debate in the run-up to the Labour conference about the details of the motion, including concerns from the GMB union which represents some workers in the energy industry.

A plan to stop emissions should go hand in hand with campaigns to save workers’ jobs in the steel industry, at Honda in Swindon, at Ford Bridgend and at Harland and Wolf in Belfast.

The transformation of these industries should harness the expertise of this highly skilled workforce and ensure an expansion of well-paid jobs, in publicly owned, environmentally friendly industries, with workers in their trade unions deciding how they are run.

A Labour government carrying out the Green New Deal would be a big step in the right direction towards addressing the climate crisis. But it must be funded by the wealth currently hoarded by the super-rich, and new green industries must be publicly owned and run democratically by workers and the trade unions.