The Socialist Party is being evicted – we need your help! 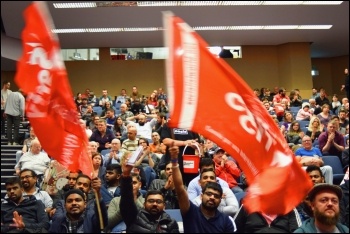 ACROSS THE SOUTHERN REGION

Please give your name, branch and mark “Building Fund”

At the beginning of autumn last year the Socialist Party received a notice to quit our national centre by the end of summer 2018. This comes as a huge blow. We have been at our current premises in Leytonstone, east London, for over 17 years – longer than any other in our history.

The landlord intends to redevelop our offices into residential flats, a process that is happening all over London. Following the Tory government’s relaxation of the planning laws there is a gold rush taking place as landlords and property developers scramble to make money out of the housing crisis.

We have therefore launched a building finance appeal to raise money to help pay for a move and for a new place.

We may need money towards a deposit if a suitable property comes on the market that we can buy; we may need to spend money refurbishing a building; we may need to pay a higher rent as more parts of London are becoming gentrified and rents are rising in what used to be affordable areas.

The seriousness of this situation for us cannot be overstated. From the first offices we rented in Kings Cross in 1964, the establishment of a national headquarters in London was a historic gain for us. Below is a short history of the progress we made in acquiring and rebuilding premises, establishing a press and purchasing our previous national centre in Hepscott Road. Hackney Wick, in 1984, enabled by an appeal for party members to donate a week’s income that raised £177,000.

This was only possible based on the huge sacrifices that members, supporters and party workers have made throughout the history of our party, detailed in the books by Peter Taaffe: Rise of Militant and From Militant to the Socialist Party.

From the first real premises in Bethnal Green in 1971 and the purchase of the first press shortly afterwards, our members and supporters made those sacrifices because they understood the importance of the party’s national headquarters and national leadership to be based in the capital city, at the heart of its national politics.

The capital is where the trade unions have their headquarters and where the majority of government institutions and foreign embassies are based. It is where most national demonstrations take place and it has the necessary transport links for national meetings.

We are where we are today because of those sacrifices and it is incumbent on us to ensure that we carry on that proud tradition. Therefore we are asking every member and supporter to pledge a donation to this building appeal.

Many Socialist Party members will donate the considerable amount of a week’s income and in some cases more, as they have done with past appeals, paid over three or four months.

We recognise that this will not be easy for many but the Socialist Party has no rich backers and we can only rely on our own members and supporters.

Your donations, whether it’s ten pounds or more from a school student, several hundred from someone who is working or thousands from a windfall, inheritance, property sale, PPI payment etc will make a vital contribution.

The history of our premises