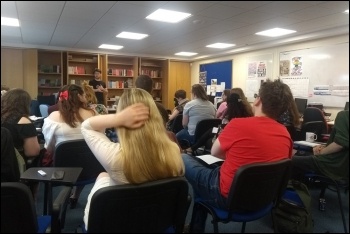 Young Socialist Party activists from across England, Wales and Scotland met for a weekend of discussion on 31 August – 1 September, just as the capitalist political crisis in the UK was tipping into a new explosive phase.

The scene was set for the discussion by Socialist Party members attending the London protest against Boris Johnson’s suspension of parliament beforehand.

We took to the streets with the demands to fight for a general election to get the Tories out, to elect a Corbyn government with socialist policies, and no to unity with the austerity politicians.

September will see students return to college and university in the midst of this crisis. The ‘Earth strike’ on 20 September has the potential to take on a new dimension as a means to fight the Tories, and the issue of free education could re-emerge with Corbyn fighting another general election on his anti-austerity programme.

This term will also see University and Colleges Union (UCU) college union ballot its members for strike action in universities on the issue of both pensions and equal pay. In the event of a strike we can anticipate a groundswell of support among students, with Socialist Students at the fore, in the same way as we saw in the UCU pension strikes of 2018.

A key factor in events in the next period will be the extent to which the working-class through the trade unions take a lead. We discussed the what we can do about the problems facing us as young workers in our workplaces. We discussed the issue of unpaid hours foisted on us at work, along with the issues of zero-hours and insecure contracts, of bullying bosses and low pay.

Members reported on the task of building our trade unions into effective organisations to take on these issues; whether by transforming our union branches or by building the union in workplaces from scratch.

Being a member of the Socialist Party gives us a unique advantage in this struggle and young members are determined to build the party. We understand that workers and young people will play a central role in transforming the political crisis in Britain but also in the struggle to change society along socialist lines.