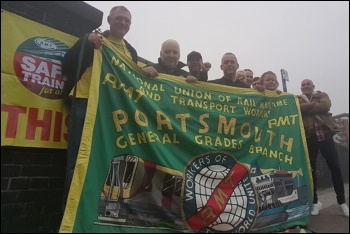 Workers on South Western Railway are striking for five days from 23 to 27 October against management plans to remove the safety-critical role of the guard.

Bosses refuse to engage in serious talks with transport union RMT to reach agreement in the long-running dispute over ‘driver-only operation’ (DOO).

The Socialist Party is taking part in the National Shop Stewards Network’s ‘Solidarity Saturday’ in support of the strike.

Guards and drivers have four further 24-hour Saturday strikes planned in their latest phase of action this autumn, on 3, 10, 17 and 24 November.

No to DOO! Save the guard!