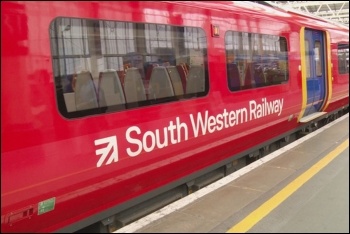 Guards in the RMT transport union on the picket line at Salisbury on 2 September – the fourth day of their current strike – were angry and defiant.

A letter had been sent by South Western Railway (SWR) to everyone concerned in the strike. The letter contained an admission by SWR that they intended to move to driver-only operation of trains (DOO) despite assurances that they had given over the past two years that this would not happen. DOO would mean there would not be a fully-trained guard on board. Much concern was expressed about the safety issues inherent in DOO trains.

Geoff Kite, RMT national executive member told the Socialist: “The RMT will continue to fight for a safety-critical guard on every train. We will not allow the company to put performance over safety by diluting the role into a token gesture to the travelling public.

“The guards and drivers on SWR have returned five ballots in the defence of the role of the guard and against the extension of driver-only operation. Our members will not give up the fight and are more resolute after the latest talks with the company.

“We urge the company to get around the table and work with the RMT to come to a resolution suitable to all, and stop procrastinating believing our members will finally give up. The RMT are open for talks any time.”