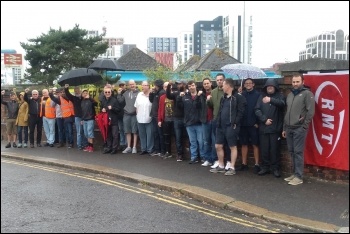 Many of them are sacrificing five days of pay for safety – to keep a guard on the train. Socialist Party members supported picket lines in London, Bournemouth and a determined picket line at Fratton, Portsmouth.

Action was suspended back in February for talks over the role of the guard. The dispute started again when it became clear that management had no intention of keeping its promises.

As one striking guard put it: “Back again. They had started serious building work when this dispute began which is now complete!” But unlike the construction work this dispute is not over because of the callous disregard of management.

Management are intent on ploughing on with driver-only operation and RMT members are showing that they will not accept South Western Railway profiting at the expense of public safety.

RMT general secretary candidate and former president Sean Hoyle came down to support as he has done throughout this two-year dispute. Sean was clear that they have to win this dispute. He went on to explain that of all their walkouts, this action will cause the most disruption for South Western Railway, being the same week as the Royal Ascot racing festival.

Sean also said that the union leadership has been too cautious in the past – calling off action on the busiest days, to not cause problems for the public. The support shown to RMT members on strike shows that train users understand all too well that this dispute is over their safety.

Socialist Students also came and gave their full support to the guards at Fratton and called for the ‘Youth Strike 4 Climate’ protesters to support the guards on 21 June.

This strike shows that profit should never come before safety. What is needed is a return to public ownership, under democratic workers’ control, so we can plan for a public transport system that works for all.

If this what the Blairites think isn’t it clear that mandatory reselection is vital to eject the pro capitalist wing from the Labour Party?

Read this week's #NSSN bulletin no.472: NSSN rallies against the Tory anti-union laws!

Committee for a workers' International@CwiSocialist·
14h

Is the time right for a new Scottish workers’ party? -READ MORE - https://t.co/tZvhK1Q6ry