Southampton asks “What will you do to stop education cuts?”

Last year’s general election saw a historic surge for Jeremy Corbyn’s anti-austerity manifesto. A large part of that wave was the 800,000 voters who switched their vote on the question of education. That crisis and that wave has not gone away.

On 23 March hundreds of parents, teachers, students, education trade unions and anti-cuts campaigners across Southampton joined end-of-school protests at 13 schools to say “stop school cuts!” The schools crisis is reaching breaking point and a fight has to be waged to ensure jobs and children’s education are protected.

The protests were followed up by a successful campaign meeting in Southampton. Hosted by Southampton Fair Funding for All Schools and the local NEU, it attracted new teachers and parents to the fight. 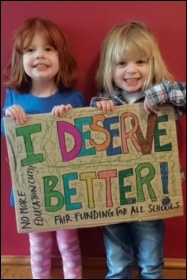 NEU activists Penny Burnett and Pete Baddams outlined the crisis facing schools and the pressure heads are under to make cuts. A local headteacher, Liz Filer, talked of the disastrous consequences cuts would have and explained schools are in deficit because they are underfunded.

Our campaign has met secondary students who are furious that their schools don’t teach music or IT! The meeting had support from Southampton Labour council cabinet member for education, Darren Paffey, and other councillors who joined the meeting, all outlining their opposition to Tory funding cuts.

The first contribution from the floor came from a Unison teaching assistant and parent. They asked the Labour councillors, “what will you do to stop the cuts?”

To this decisive question Labour councillors retreated to warm words of solidarity and apologies they couldn’t do more. It is clear this did not satisfy anyone in the meeting.

Socialist Party member and Trade Unionist and Socialist Candidate candidate Nick Chaffey outlined what powers councils have to use ‘licensed deficits’. He pointed out that these could be funded from the £120 million reserves Southampton council has, which could be paid off by an incoming Jeremy Corbyn-led government. Nick said, “if councillors were prepared to fight, they would be heroes and get huge support.”

Councillor Keith Morrell has consistently voted against cuts, and was scandalously expelled from the Labour Party for doing so. He challenged Labour councillors to tell the truth to voters and fight like Labour’s pioneering councillors who fought for state education.

Our local campaign has drawn a clear line in the sand – this far and no further. We will continue to campaign at school gates in coming weeks and make the local elections a clear choice about what our council needs to do to stop Tory school cuts.