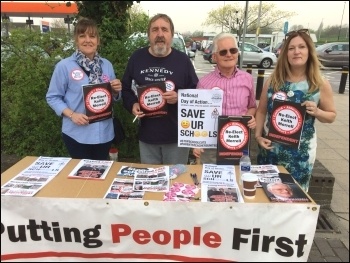 Sadly it wasn’t Jeremy Corbyn’s anti-austerity policies that were on offer in Southampton but his right-wing Blairite opponent, Labour council leader Simon Letts’ and his fellow councillors who have cruelly voted to close disabled services.

Despite a heroic campaign by parents, these Blairites consistently turned down calls to save Kentish Road Respite Centre. With the support of anti-cuts councillor Keith Morrell, these parents campaigned long and hard and decided to stand with Keith in the local elections.

Keith Morrell was re-elected on a landslide with 47% of the vote, an endorsement of the consistent stand he has taken. Simon Letts was punished and lost his seat, but so have those on the left who have argued an anti-austerity Corbyn manifesto was on offer. It wasn’t!

Significantly the Tories lost their leader too, yet further evidence of the anger and opposition to eight years of austerity. Imagine if Labour had taken up the policy of re-elected anti-cuts councillor Keith Morrell and protected jobs and services.

Labour could have swept the board and begun to build the sort of mass campaign that can win back the stolen government funding Southampton so desperately needs.

The gains Labour made in Southampton are not gains for Corbyn and the left. The new councillors are not Corbyn supporters and will continue to assist the undermining campaign by the Blairite wing.

None of the Momentum candidates won in Southampton. Local left Labour Party members need to draw urgent conclusions from this and adopt a clear anti-cuts manifesto. To build a campaign they should seek to collaborate with anti-cuts councillors locally, the local trade unions, community and anti-cuts campaigns.

Southampton Socialist Party will continue to work with all those opposed to austerity and work towards the implementation of a no cuts policy by Southampton council.