Stop Southampton Cuts – What next after November 30 strike? 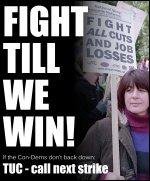 Southampton Socialist Party Rally
Fight the Cuts, Fight for Socialism
What next after Nov 30 strike?
Tuesday 6 December, 7.30pm
Sir James Matthews Building,
Above Bar St, Southampton, SO14 7NN
Speakers:
Peter Taaffe
Socialist Party, General Secretary
Tim Cutter
Hampshire UNISON Br Sec (personal capacity)
Perry McMillan
Trade Unionists & Socialist Coalition
Pru Caric
Youth Fight for Jobs
Southampton council
tax payers and council workers are currently facing massive cuts in jobs, pay,
pensions, benefits and services.
280  jobs this year alone have gone. Vital
services such as Youth Services and Adult Care have been  cut. Council workers have had their pay
cut, many losing over £1000 a year, in total slashing £6 million from the wage
bill.
We are paying massive
council tax bills and getting less for it. Is this what they mean by ‘value for
money’? This is a rip off
With Council leader Royston Smith at the wheel
(this time wearing a seatbelt) we are being driven at breakneck speed into a
brick wall of £50 million cuts over the next 3 years.
He says that we “cannot deny or avoid” the current
financial and global crisis, the question is who is reaching deep into their
pockets to pay for this crisis?
Not the bailed out bankers who continue to award
themselves huge bonuses, not the billionaires and corporations who find “loopholes”
to avoid paying taxes, nor the politicians busy feather nesting their own
futures at our expense.
Meanwhile working people, pensioners
and the unemployed suffer the biggest squeeze on living standards for over 30
years,
If that were not bad enough, the city council have
recently voted to implement a “Change Programme”. Innocent enough in words but
in reality this is newspeak for the wholesale privatisation and decimation of
local services.
The Council plan to “devolve responsibility” i.e.
hand over  powers for implementing
this privatisation programme to an unelected technocrat, namely the chief
executive, currently paid £205,000 for his efforts.
Cameron has called it “common sense
Conservatism.” In reality it represents a decisive move away from local
democracy towards our own municipal mini-Italy!
Who will oppose the
cuts?
The choice facing Labour councillors is stark and
clear. Either continue to administer the bad medicine albeit with a different
label or stand up and say “enough is enough”. We ask “which road will you take?”
The recent strike action by council
workers in UNISON and
UNITE has been supported by the
majority of people in Southampton. It shows the possibility of building a mass campaign
against the cuts,
Despite this, Southampton Labour Party,
its group leader Richard Williams, and local MPs John Denham and Alan Whitehead
have spoken out against the strikes and are proposing to make massive cuts of
their own.
They have been mocked by the Tories
over their “mythical manifesto” and in reality they plan to make cuts as New
Labour councils have across the country.
A Council Budget
for Jobs & Housing
Instead of the Tories privatization
programme we are campaigning for a real alternative, a budget to meet the needs
of Southampton people.
A budget for:
• jobs and apprenticeships
• affordable council housing
• education and youth services
• social care and support for the
elderly
This would require building a united
campaign involving citizens service users and unions, mobilizing the whole city
through public meetings and mass demonstrations. To demand that government
returns the money it has stolen from local councils.
In the 1980s Liverpool City Council,
led by members of the Socialist Party, succeeded in winning £60 million from
the Thatcher government to build housing, nurseries, leisure centres and create
thousands of jobs.
More than enough resources exist nationally to
fully fund the provision of the services we require. The Public and Commercial
Services Union (PCS) point out that up to £120 billion tax is evaded, avoided
and uncollected every year. Most of this is from wealthy individuals and
corporations.
Support Anti-Cuts
Candidates in the May 2012 Elections
We need councillors who will give full
support to striking council workers and who will vote against all cuts. In May
2011 13 anti-cuts candidates won over 1800 in Southampton Council elections
under the banner of the Trade Unionist & Socialists Against Cuts. We intend
to build on that success next year.
For more
info contact Nick Chaffey on 07833 681910