Southern Region – After November 30 Strike: What Next? 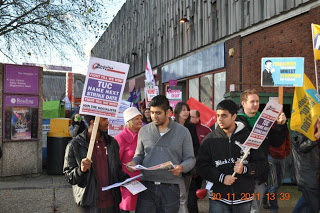 Regional
spsr -
December 7, 2011
Southern Region – After November 30 Strike: What Next?
On
November 30 pickets and rallies brought tens of thousands of workers
onto the streets across the region. Over 5000 in Southampton and Oxford,
3000 in Winchester, 2000 in Reading, 1500 in Winchester, 600 in
Aylesbury and Kingston, in Woking, 300 in Leatherhead and Wycombe. This
was the largest  coordinated strike action since the 1926 General
Strike.

Socialist Party members
intervened in events across the Southern Region. We supported pickets
and rallies in 14 different towns across Hampshire, Berkshire, Surrey,
Oxfordshire and Buckinghamshire. Many Socialist Party members themselves
were on strike, in many cases having played a leading role in
organising pickets and rallies. Thousands of leaflets were distributed
arguing for a fight against ALL cuts, the need to build further
coordinated national action in January, to build a political voice, a
new mass workers party, for the fight against austerity and to promote a
socialist alternative.


Below
we carry some reports and views on the day. Please feel welcome to add
your comments and thoughts and proposals for building the fight against
cuts.

The
day started with us visiting the picket at the Park building, belonging
to the University of Portsmouth. We met a number of lecturers who were
taking strike action and spoke to them about their situation and what
they thought should be done after November 30th. They talked about the
support members of the private sector had given them and that it was
disgraceful how the government was trying to turn public and private
sector workers against each other. When it came to what should be done
next, there seemed to general support for another strike.

After
visiting the picket at Park building we moved onto Richmond building,
another of the University’s departments. Unfortunately the picket at
Richmond seemed to have been abandoned so we instead moved to the
Portsmouth Students’ Union (SU) earlier than planned. At 11am, the
student march set off from the SU and began to make its way towards the
Guildhall. The march included several university lecturers and three
members of the SU sabbatical team including the president of the
Portsmouth SU. On our way to Guildhall we passed the university’s Eldon
building which has attracted recent attention due to the university
closing down the buildings’ art workshops as well as the possibility of
staff cuts within the art department. The front of the building was
covered in signs and banners condemning the cuts to the department.

Upon
reaching Guildhall, the march was met with applause from those already
in the square. In total, over 3000 people turned up for the rally at
Guildhall Square. At the rally we heard speeches from representatives of
the unions in attendance including the NASUWT, NUT, ATL, Unite, Unison
and RMT President Alex Gordon, who congratulated everyone for the
brilliant turnout. There was also a speech by a representative of the
Occupy Portsmouth movement as well as Becky Gardner, women’s officer at
the university, and Claire Heath who was a former student who lost her
internship at the university after speaking out against cuts.

During
the rally I managed to speak to a number of people including members of
the Occupy movement. The members of the group can clearly that there is
a serious problem with the current financial system but they were
unsure of how to go about changing it or what alternative could be
provided other than a “Robin Hood tax”. I also spoke to a number of
members of Unite and the PCS about what they thought should be done
next. The general consensus was that another strike should be called in
the New Year and that private sector workers should be encouraged to
take action too. Personally I agree. Another strike does need to be
called in the near future with support from both the public and private
sector. We need to show solidarity because we are fighting for the same
cause: fair pensions for all as well as opposing the unnecessary ConDem
government cuts.

Over 5,000 trade unionists were applauded by the public as they marched
through the city. PCS branch secretary at the Maritime and Coastguard
Agency, Andy Cooper, says: “The TUC should name the next strike date
tonight on the news”. Picket lines across the city report strong support
for the strike. A radiologist was asked by management what the union meant by emergency
cover. A union steward replied, “Imagine it’s a Sunday and you’re on the
golf course, do YOU come in?” Kevin Hayes commented “It was the biggest demonstration
Southampton has had for decades. It was young. It was noisy. Many
taking part for the first time. This truly is a beginning. Socialist
Party members played a full part, with leaflets that addressed the
question ‘where now, what next?”.

Public sector workers took to the picket line in High
Wycombe and the surrounding area, in what may have been the biggest strike
since 1926. Many schools were completely shut, and most teachers at the Royal
Grammar School, not generally known for militant trade unionism, were on
strike. The large picket line at Wycombe Hospital was well-supported by the
public, patients and ambulance staff, and many people driving past hooted at
the strikers in support. There were also picket lines at Bucks New University
and the offices of the council. When I arrived at the picket line with our
placards I was immediately asked to have my photo taken for the local paper!
The demo was far larger than expected with around 300 people
on a march through Wycombe town centre, meaning that organisers had to book a
bigger room for the closing rally! Many of those on strike had never taken
industrial action before. Members of little-known unions such as the Society of
Chiropodists and Podiatrists were present at the picket line. One manager of a
local restaurant provided food for the picket lines and for our rally,
realising the impact cuts would have on local shops. Meanwhile, the streets
were packed with shoppers and their children taking advantage of the day off.
At the strike rally, union reps and striking workers, as
well as members of local anti-cuts groups, made stirring speeches in which they
thanked everyone from taking part in the strike and demonstration and talked
about the need to fight the government’s pension changes and other planned cuts
to wages, services and jobs – for example, the NHS is already funded 17% below
the average in the county and is already severely stretched.
In the evening, Bucks Save Our Services held a public
meeting, during which union members and reps spoke about the impact of the
pension changes and the other cuts. One speaker was a headteacher out on strike
for the first time, while other teachers expressed their anger at plans to turn
all Bucks schools into academies, which, if successful, would take all
education out of the hands of the LEA and allow employers to set their own pay
and conditions.
Although people were angry that they had to go out on strike,
the mood was frequently upbeat and there was a feeling that the struggle stood
a definite chance of being successful. The idea that the public sector strike
was a “damp squib” was dismissed as ludicrous by most strikers and their
supporters, as there were an estimated 300 people on Wycombe’s march plus
another 500 in Aylesbury and more than 800 in Milton Keynes.
The intervention was very successful and we received good
levels of public support. However I believe that it is now extremely important
to extend the struggle to workers in the private sector and to encourage them
to join and become active in their union. It is also very important to raise
the ideas of a new workers’ party which our speakers did on Wednesday because I
think that is something huge numbers of people agree with.

600 marched
through Kingston, 600 in Woking and 300 in Leatherhead. Workers from
local government, health, schools and the civil service joined forces on
the biggest day of strike action seen in Surrey for decades.


Coordinated by Hands Off Our Pensions in Surrey (HOOPS, part of Save Our
Services), activists from Unison, GMB, Unite, NUT, NASUWT, ATL, NAHT,
PCS and other unions were united in condemning the attacks on pensions
as well as opposing all cuts in public services and public sector pay,
terms and conditions. Socialist Party members played a key role in
building for and organising the Surrey rallies as well as the dozens of
well attended picket lines across the county.
I (Paul Couchman, Unison and HOOPS secretary) chaired the Leatherhead
rally and joined other speakers in calling for further national action
and the need for a socialist alternative. Jane Armitage (Surrey Unison
strike leader) and Thelma Snelgrove (PCS secretary, HMRC Woking) led the
Woking rally which had five times the expected turnout and echoed the
call for further national strikes.

Surrey County Unison had nearly 30 picket lines – some with 20 and 30
members turning out. Big congratulations particularly to Nina and Coby,
Unison stewards who had 35 on their school picket line and Alan, who got
28 out on the picket of the county offices in Reigate. A clear message
from Surrey unions – we are united, organised and prepared to fight till
we win.

30th November saw the highest turnout of trade unionists in Reading and
Bracknell since the 1980s or even longer. There were well supported
picket lines involving many unions including Unison, GMB, Unite, NUT,
UCU, Napo, etc, with large rallies and marches. The day culminated in a
large rally in Forbury Gardens of over 2,000. There were well received
speeches from trade unions as well as the National Pensioners
Convention. The Socialist Party participated with posters, newspapers
and leaflets. We had stalls at the start and conclusion of the march,
with many new and enthusiastic comrades getting involved. This has been a
historic day in Reading and Bracknell and it is just the beginning of a
long, bitter struggle which we must win.

We saw the largest labour movement
demonstrations for generations. Workers from the NHS, teaching
professions, civil servants, probation and local government joined
together in a show of strength not seen for over 30 years. The
demonstrations and picket line strength exceeded organisers’ expectations
and there was a clear understanding that this was just the beginning and
not the end. All were enthused and were going back into the workplace
confident in taking the message out to their colleagues who weren’t out
today. There was an openness to socialist ideas and the sales of the
Socialist were the largest ever. Socialist party members were
interviewed on the television and local press.