Stop the latest Tory attack on our pensions 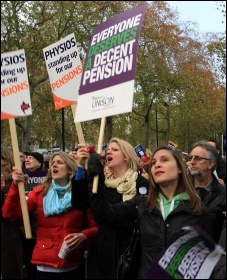 Pensioners are under attack. The Centre for Social Justice, a right-wing think tank, is proposing that pensioners should in effect work until they drop. Led by former Tory leader Iain Duncan Smith, an architect of vicious welfare cuts, the think tank wants pensioners to continue working until they are 75 from 2035, with pension age rising to 70 by 2028. UK pensions are currently among the lowest in Europe.

This will mean that many pensioners will die before they retire. For example, in Glasgow, the average male life expectancy is only 71.6 years. Women, on average, could only expect three years of retirement.

For the first time ever, life expectancy is beginning to decline, thanks to austerity and rising poverty. This means more people dying before they get to pensionable age.

Pensioners, youth and trade unions must unite to defeat this reactionary proposal.

Recently, the BBC decided that they would no longer subsidise the TV licence, meaning that pensioners must find extra money just to watch the TV (see ‘Defend free TV licences for over-75s‘).

Tory policies make pensioners work longer, receive lower pensions, lose their TV licence subsidy and suffer a general deterioration in living standards. For too long pensions have been seen purely as a pensioner’s problem, but socialists recognise that it is a class issue – most pensioners are workers no longer at work.

Many pensioners continue to pay tax upon retirement and are subject to the financial pressures facing other workers, such as price and rent rises. Many pensioners are also unpaid carers and are forced to work part-time to make ends meet.

The National Pensioners Convention seeks to unite pensioners and young people under the banner of Generations United, to present a united front against exploitation of both youth and pensioners. The trade unions need to play a bigger role in defending pensioners and pensions, they will all be pensioners one day.

The 2011 public sector strikes against pension cuts were the single biggest day of industrial action ever in Britain. And young people were their biggest supporters.

We need to build unity and solidarity among workers, youth, pensioners, students, tenants and trade unionists to oppose these Tory attacks on workers. We need an immediate 50% increase in the state pension as a step towards a living pension.

Free TV licences must be retained, and the ‘triple lock’ – where pensions rise in line with inflation, 2.5% or average earnings, whichever is higher – must be protected, along with free bus passes and the winter fuel allowance.

We must reject any increase in the pension age and in fact campaign for a lower pension age so that pensioners can enjoy more years of retirement, if they wish.

The Socialist Party campaigns for a minimum wage of at least £10 an hour, as a step towards a real living wage. We fight for rent controls, an end to zero-hour contracts and against all cuts to health and social care.

Like many other issues under capitalism, pensions will never be secure as long as the 1% cream off the profits while the 99% are left with the crumbs. A Corbyn-led Labour government with socialist policies must pledge to protect pensions from right-wing think tanks and Tory attacks.