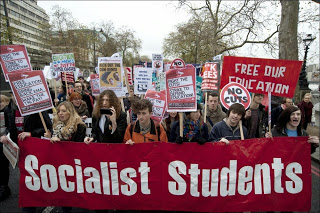 Read more at: www.socialiststudents.org.uk
Four years ago, on 10 November 2010, London’s streets thronged with over
50,000 young people.
The mood was angry, but it was also electric. This was the start of a
movement which gave thousands their first taste of struggle.
Two weeks later, up to 100,000 students walked out of schools and
colleges. Austerity’s bitter medicine, in this case the tripling of tuition
fees and snatching of education maintenance allowance, was angrily
rejected.
Students marching on 19 November 2014 will rightly be asking what the
next steps are for our movement today. How can we rebuild an effective movement
to challenge the government and end austerity in education?
The immediate task will be solidarity with university staff participating in a marking
boycott and potential strike action over pay and conditions. Their fight is
ours too.
But there is also the question of our leadership.
Traitors
Outrageously, in the run up to the march, the right wing leadership of
the National Union of Students (NUS) attempted to pull the plug.
In an online statement, NUS president Toni Pearce announced she and other full
time officers were overturning a decision by the union’s national executive
council to support the protest. “Safety concerns” were the given
reason.
This is a disgraceful dereliction of duty. In the run up to a general
election, with further attacks on education threatened, failing to organise or
even support a national demonstration is criminal.
Should the NUS have genuine concerns about safety, its
attitude should be to provide resources and expertise to assist organisers in
resolving them. Better still, if official student leaders had organised the
demonstration in the first place, they could easily have prevented any such
difficulties.
We must not be prepared to wait for ‘permission’ from right wingers like
Toni Pearce to organise the desperately needed fightback.
Looking back, the magnificent 2010 student movement can seem distant. It
too was betrayed by the leadership of the NUS, who abandoned the fight after
the first demonstration.
Combined with this, the working class – with its huge economic power –
had yet to enter the arena of struggle. Despite boiling anger and a strong
sense of solidarity with students, workers were being held back by a ‘block at
the top’ of the trade unions.
These factors meant round one in the battle against sky high fees and
cuts ended in defeat.
Fightback
But no defeats are final. Following on from the march, we need to return
to our campuses and continue to organise against cuts. This means strikes,
protests and occupations to keep the pressure up on university management and
students’ union leaders to resist attacks.
It also means fighting for a political alternative. None of the main
parties can be trusted with our education. Sitting tight and hoping for a
Labour government – the party who introduced fees in the first place – is not a
viable strategy.
The energy and vitality of the student movement, when linked with the
muscle of organised workers – the trade union movement – makes a formidable
force. The scenes of resistance in 2010 were just the beginning.
Students and workers unite!
#DebtdemonstrateFeesLabourNUSSocialist StudentsStudentsToriesUnions TUSC