Harrowing scenes are now coming out of Sudan of the 3 June massacre, where doctors report well over 100 people were murdered by the Transitional Military Council (TMC) and general ‘Hemeti’ Dagola’s brutal Rapid Support Forces (RSF) militia.

With the suspended internet now restored, videos and testament have been shown on mainstream media of mass shootings of protesters, along with police beating people with sticks, concrete tied to the feet of victims who were then dumped in the Nile, rapes, and even doctors and medical staff being shot.

Despite all of this, it did not force the masses into submission. Just like during the Arab spring of 2011 in Tunisia and Egypt, the Sudanese masses lost their fear of the regime and turned out on 30 June to defy the government once again, with huge demos in all the 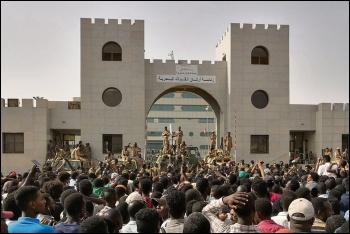 With a threatened general strike, the TMC conceded to talks brokered by the African Union’s Peace and Security Council and the Ethiopian government.

The TMC and the opposition, Forces for Freedom and Change (FFC), cobbled together a power sharing deal that leaves five members of the military alongside five civilian appointees chaired by a retired military figure. The deal is supported by the US, British, Saudi and UAE governments.

Divisions at the tops of the regime were revealed, with reports of an attempted military coup carried out by sections of the military that were opposed to the deal being negotiated.

Protesters returning to the streets on 13 July were not happy with the mass murderers of the TMC being left in place. They are exerting pressure on opposition leaders in the FFC, reflected, at the time of writing, with the drafting committee failing to finalise an agreement on power sharing.

This proposal leaves the murderers of 3 June in power and is unacceptable to many of the protesters.

There should be no support for such an agreement or any coalition with the military tops or pro-capitalist leaders. It aims to pacify the mass movement, with promises for future elections in three years, so the military can regain brutal control over the situation, with further repression certain to follow.

The involvement of the African Union is not to ensure the masses win the change they desire but to act as a brake on the revolution. They fear it spreading beyond the borders of Sudan to other countries in Africa.

The revolutionary events in Sudan – with all the problems of capitalist crisis unresolved and intolerable conditions for the workers worsening – have the potential to reignite the 2011 ‘Arab spring’. That is why the TMC has received the backing of reactionary regimes in Egypt, Saudi Arabia and UAE.

All this deal represents is the corrupt ruling capitalist class and the tops of the military clinging onto power. With their fingers in all parts of the economy and profitable links to foreign regimes, including Hemeti Dagola being paid by Saudi Arabia to send troops to fight their war in Yemen, the TMC want to maintain their power and privileges.

As the revolutionary movement has developed over recent months, organised committees are developing, organising the general strike, protests and community defence. Trade unions repressed under the dictatorship are being rebuilt. This is where the movement should be built.

Independent organisations of the working class – armed with socialist policies to end the economic crisis and rule of the military – are the only force in society that can build a united movement to overthrow the capitalist elite.

The huge protests should be the basis for a clear call for a revolutionary constituent assembly, as a means by which a genuine government of the workers and poor can be directly elected and begin to carry through the revolutionary change needed.

The protests should be developed into an indefinite general strike to overthrow military rule and bring to power a government that would implement the popular call for elections to a constituent assembly.

A genuinely revolutionary constituent assembly would bring the murderers of 3 June to justice, purge the military and judiciary, release all political prisoners, establish a free press, freedom for political parties and the trade unions to organise and put an end to the persecution of ethnic minorities.

To consolidate these policies and to provide food, fuel, health care, education, housing, jobs, justice and end corruption, a government of democratically elected representatives of workers and poor is needed that will implement socialist measures through the nationalisation of the banks, industry and foreign monopolies.

But to secure revolutionary change, an appeal will need to be made to the workers and poor of Egypt and other neighbouring countries to join the movement for socialism and aim to build a genuinely voluntary socialist federation of Sudan and neighbouring states.

The urgent task facing socialists and workers in Sudan is building a revolutionary mass workers’ party capable of carrying through these tasks and securing the fruits of this revolution.

“The revolution must continue until we are free”

Several hundred people representing the Sudanese diaspora in the UK met in Cardiff on 14 July to celebrate their culture but also to discuss the ongoing revolution in Sudan.

There were speakers from across the political and generational spectrum. One speaker from an organisation representing Sudanese lawyers spoke in favour of the recent agreement between movement leaders and the Transitional Military Council.

This went down well, especially with older, professional layers in the room – possibly because it means that there is an apparent pause in the horrific violence – but many of the young speakers on the podium and in breakout discussions did not agree.

“Why would we ally with the butchers who have killed and raped our people?” a young Sudanese woman asked. Another remarked: “We have lost so many people, we cannot stop here, the revolution must continue until we are free”. And a young Sudanese man suggested: “We need to stay out on the streets to sweep aside the military and the system that supports them”.

The Socialist Party was invited to speak and was greeted warmly. Our speaker, Gareth Bromhall – also assistant secretary of Swansea Trade Union Council – brought solidarity greetings from the trade union movement and talked about the importance of international solidarity.

Gareth raised the socialist demands of CWI supporters which was met with a round of applause and a several young people came up to talk to us during the breaks about what we think should happen next to develop the Sudanese revolution.

Many were in agreement that there must be no trust in the military council or any agreement with them and that the street movement must continue. Only by sweeping aside any with ties to the former al-Bashir regime, and the capitalist system that they both relied on to hold power, will Sudan truly be free.