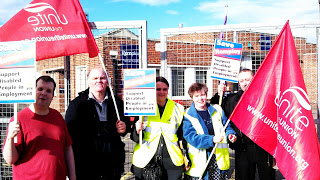 On strike to defend jobs

On Thursday 19 July and 26 July Remploy workers across the country
will be taking action to prevent the closure of 27 factories. The whole trade
union movement should mobilise to support Remploy workers fighting to save the
factories.
Maria Miller “Remploy killer”, Tory Minister for Disabled People
has announced the closure of 27 factories including five in Wales, but this
vicious government wants to close all 34 factories including eight in Wales and
hand the work over to its business friends.
Report from Ken Richie, Disabled
Activist Portsmouth Remploy pickets speak out
On Thursday 19 July Remploy Unite members in Portsmouth joined the
picket lines to show their opposition to the threat to jobs.
Rosemary has worked at Remploy for 35 years, “This is my life. If
this place closes would we get other work? This was a job for life. It it
closes it will effect everything, including our pensions.”
Gary added, “I can’t remember the last person they took on. People
want dignity, a wage, people have a right to work. Cameron says we sit around
drinking tea. That’s not true. If we havn’t got work here we do maintenance and
cleaning duties. What Remploy needs is investment in new machinery and new
contracts.”
Unite steward in Portsmouth Remploy said, “Our members want
security and to know their future. We need to get people back into work. We
have young people here on eight week work experience, they should be offered
jobs. I’ve worked here 34 years. Whoever takes over here wants to reduce
disabled people to 51% of the workforce. I’ve been amazed at the support here
today.” Defend the welfare state
This is one of the most brutal attacks on disabled workers, but it
is also an attack on the whole trade union movement. Remploy was set up to
provide real, useful work for disabled workers as an important element of the welfare
state which workers had fought to establish after the war to protect us all
from the effects of unemployment and poverty.
The Con Dem coalition government wants to break up the welfare
state and throw us back to the conditions of the 1930s. The closure of all the
Remploy factories is a key part of that process and the trade union movement,
campaigning to defend the welfare state must rally to support the strike action
of Remploy workers.
Socialist Party supports:
« Full support from the whole
trade union movement for Remploy workers
« Open the books to disclose
exactly how much the directors have been paid since 2005
« Keep all Remploy factories
open
« Implement the Remploy unions
plan to save the business
« For a government campaign to
encourage public procurement of Remploy prodcuts
« For a 24 hour general strike
to stop the Con Dem government cuts