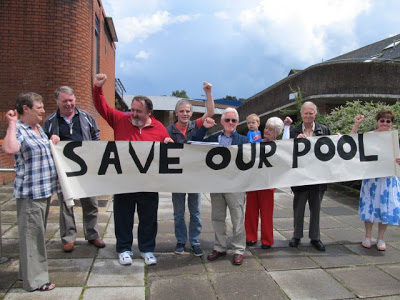 Save Oaklands Pool
The stand taken by Coxford councilors, Keith Morrell and Don
Thomas, to vote against the Labour budget cuts and proposal to close Oaklands
Pool has received enormous support from the local community and across the
city. Importantly they have received the backing of local council unions.
It is now essential this support is mobilized to maximize the
pressure on the council, to reverse the cuts and save the pool. The council has
reserves and borrowing power to raise the finance, after all it was found to
build the Titanic museum!
No Privatisation of Oaklands Pool
It has been
suggested that if the council havn’t got the money, it should be handed over to
the community to run or a private provider found. But then where would the
money come from? The risk would be passed to the community and inevitably would
mean going to the private sector who would end up running the pool for profit.
Private companies offer to run services not for the community but
for profit. They do this by running down services, putting up charges, cutting
staff and their pay and conditions. Oaklands Pool was built and paid for with
public money and is an asset that should not be given away. Privatisation is no
solution.
No need for cuts
The future of Oaklands Pool is under threat because of the
government cut to council funding. The ConDems are cutting 25% of the money
Southampton receives up to 2014, with further cuts promised.
But it is becoming clearer to everyone that the ConDem cuts are
for the benefit of the super-rich, whose profits soar and who evade their taxes
to the tune of over £120 billion.
Unite Against All Cuts
Everyone is being hit by cuts. Jobs, pay pensions, benefits,
schools, hospitals and social services. A united campaign of the community,
council workers and the trade unions must be built to oppose all cuts,
redundancies and privatisation, to reverse the cuts and restore council
workers’ pay. Such a mass campaign could put huge pressure on the majority
Labour group not to implement cuts and to fight central government for the
funding this city needs.
Support Rebel Councillors
Keith and Don now face disciplinary measures by Labour officials
who want councillors to make cuts. Council unions must call on all councillors
to join Keith and Don and oppose cuts.
Mass Lobby against Cuts
The next council meeting is on Wednesday 12 September. This will
be an opportunity to mobilise mass support for the stand of Coxford councilors
and opposition to all cuts. The Socialist Party gives full support to Keith and Don and will
give support to any other Labour councillor who is prepared to join them. The
impact of their stand fully vindicates the election campaign of the Trade
Unionists and Socialist Coalition in opposing cuts. We must now ensure
this campaign grows in support.
Join the Fight – Join the Socialists!
Southampton Socialist Party has consistently campaigned against
all cuts. Through our work we have ensured St Mary’s Leisure Centre, Bitterne NHS
Walk-In Centre and Crowlin House remain open. To remove the constant threat of
cuts, we need to campaign for an alternative that uses the wealth in society to
meet need not profit, a campaign for jobs, a living wage, affordable housing,
free health and education. Join the fight for socialism!
For more information contact Nick Chaffey on 07833 681910 or email
sotonsp@gmail.com