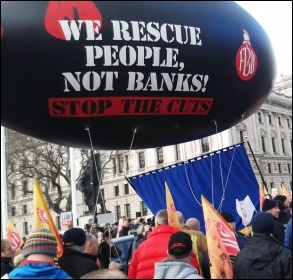 The Fire Brigades Union (FBU) in Surrey has passed a motion of no confidence in the local fire authority, saying planned budget cuts will see firefighter numbers plummet.

Already in Surrey, since 2010, firefighter numbers have been reduced and the FBU says that a further £10 million of budget cuts is on the cards, which it claims would leave Surrey Fire and Rescue with just 117 full-time firefighters.

In 2010 the service had 378, meaning a potential reduction of more than two thirds in 12 years.

The union also references the recent Grenfell Tower tragedy in their motion.

Socialist Party members in Staines, through Save Our Services inSurrey, have worked closely with the FBU over the past few years – particularly in the fight to save Staines fire station from closure (where we have won a temporary reprieve).

Our petition is still open and can be signed online here:petitions.surreycc.gov.uk/SaveFireService/

In April, Surrey FBU voted to support local Trade Unionist andSocialist Coalition candidate and Socialist Party member, Matt Clarke, in the May council elections. This was due to the solidarity shown by the Socialist Party to local firefighters in their defence of services.

The crisis in public services has reached an acute level when the workers in those services now have to declare a complete loss of confidence in the local authority.

Richard Jones, secretary of the FBU in the South East, told the Socialist: “These budget cuts are completely unacceptable and show, once again, how little regard the fire authority has for the safety of the public.”