Teacher and health worker take fight to council in Oxford 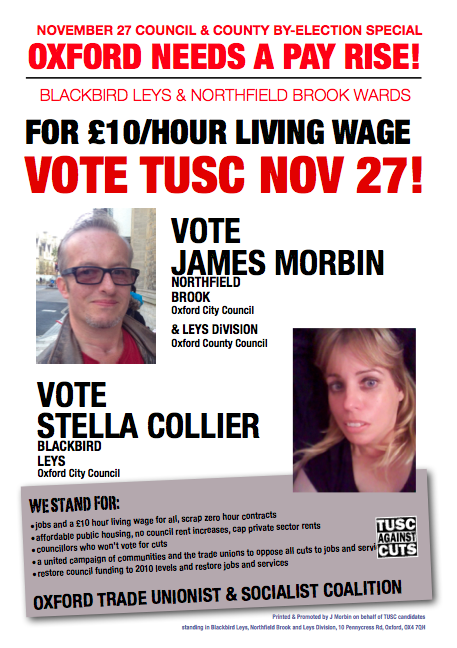 Rather than stand up and fight wage cuts and privatisation, or back
strikers fighting for a wage rise, Labour councils like Oxford have
meekly carried out Con-Dem attacks.
Stella and James outlined their reasons for standing:
“We want to stand to protest against problems workers are facing in
Oxford. Low pay and high housing costs make life impossible for us. 45,000
commute into Oxford every day because housing in the city is unaffordable. A
two bedroom house here costs up to £300,000! Despite Labour running the council, no social housing was built in 2013.
“As a result, rents are unaffordable. Reports of tenants forced to
pay £800 a month for a room in a shared house are not uncommon! It is estimated
there is a need for 30,000 new homes in the city.
“This year’s Labour council
budget was titled ‘a fair future for Oxford’. It combined a 1.9% increase in
council tax, an average council rent increase of over 5% and £5.4 million cuts!
Is it any wonder there is such hatred for politicians? A recent council
by-election here saw an 8% turnout! “We have had a very positive response to our leaflets, petitions
and stalls at the local shops. The demand for better pay and affordable housing chimes with many. It is the first time TUSC has
stood in Oxford, but it gives us great encouragement for the potential to build
support.”
The Trade Unionist and Socialist Coalition (TUSC) is an electoral
alliance that stands candidates against all cuts and privatisation.
It involves the RMT transport workers’ union, leading members of other
trade unions including the PCS, NUT and POA, the Socialist Party and other
socialist and anti-cuts groups and individuals.
For more info about TUSC visit www.tusc.org.uk
#A?10NOW!councilHousingLabourOxfordPayTUSCUnions