The unheard voices of Gosport 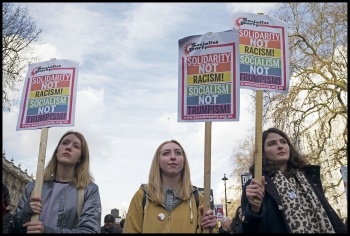 My name is Peter Winter. Throughout my life in Gosport, I have seen and experienced first-hand the effects of austerity on my generation and those that came before.

The cuts to my education, which still continue for me in the youth services I work for, made everything seem as if it was crashing to a halt. My family served in the navy, police force and care industries, so I naturally came to work in care as well.

I can say that due to the cuts life is getting harder for those just trying to make ends meet. I work as an activities coordinator, youth worker, and tutor just to survive. I want eventually to work with the NHS as an art therapist.

I’ve been speaking with some others of my generation in Gosport to discuss, in our opinion, what is happening and what should happen in the years to come.

Mass poverty – estimated by the Resolution Foundation as 23.2% at risk of poverty in the UK – is perceived as a massive injustice committed by the Tories. Alongside this, councils have cut youth services by about £70 per child since 2010-11 – 70% of the budget – according to Labour analysis.

It is blatant that the government does not care for people struggling with mental health issues. Ellie H pointed out to me that Theresa May lit up Downing Street in green to mark the beginning of mental health awareness week. Meanwhile, her government has cut millions from mental health funding in real terms.

Ellie and Jay B agreed the Conservatives have put the working class in dire circumstances. Workers have to watch our friends and family struggling from month to month, year to year. Where has all the money gone from these cuts?

Shannon L asked “why were the cuts needed within the sectors the Conservatives chose?” They seem to focus on what the working class relies on, such as funding to attend further and higher education. For many students now, their ‘bursaries’ are their parents’ income.

A shared fear is the deprivation of the NHS. We demand public ownership of a health service for the people. There is also the fear of prices continuing to go up as wages remain the same, below the living wage.

And the people I spoke to also had a lot to say about Donald Trump visiting Portsmouth – the other side of the harbour to Gosport – for the 75th anniversary of D-Day. Shannon and Izzy W felt May’s government had tried to put everyone in Britain in an alliance with a sexist, homophobic, racist president.

On the subject of Trump taking part in the anniversary, it was seen as a disgrace on all of the working-class people who fought in World War Two who were told it was to end the persecution of millions.

Persecution is all Trump has done as president. He has carried on all the vicious anti-worker policies of US capitalism, while further persecuting minorities such as LGBT+ people, further victimising and humiliating women, further oppressing thousands of migrants and asylum seekers, and more.

Many in our generation view Trump as “playing games with the lives of millions of people,” to quote Shannon. The Tories are selling us out, auctioning off our services and livelihoods, backed by the Blairites, while May holds Trump’s hand in the process.

I want to help people, to give back to my community. By joining the Socialist Party I am now able to, through activism that I believe can shape our world into a better place.

Committee for a workers' International@CwiSocialist·
7 Jul

The Real State of German Capitalism and the Class Struggle https://t.co/dtSRu0SHZf

Far right violence used as a pretext to call for a blanket ban on protests - including the trade union and left protests. Essential that trade union and Labour leaders speak out clearly against this.

Committee for a workers' International@CwiSocialist·
19 Jun

Committee for a workers' International@CwiSocialist·
21 Jun