TUSC council candidate vows never to go to the ‘dark side’! 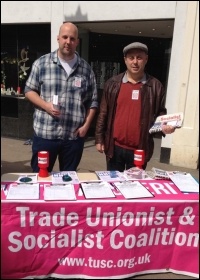 Matt Clarke, the TUSC council candidate for Staines, was approached on 13 April by the Surrey Advertiser for an electoral statement ahead of the election and was also asked which Star Wars character he would be!

Surrey is one of the wealthiest counties in one of the richest countries in the world. Yet apparently we cannot afford street lighting, adequate flood defences, school places, good roads or public transport or safe levels of fire and rescue services.

If I am elected I intend to make the socialist case for standing up to the government and refusing to cut and privatise our services. I will work with any other elected councillors prepared to do the same.

I will stand with the local community and trade unions in defending our public services, using my position to publicise their campaigns and donating all my councillor’s allowances into those campaigns.

If I were a character from Star Wars:

I will never go to the dark side, so I’ll say Obi Wan Kanobi. Like the Jedi ways in the film, socialism is seen as a thing from days gone by but it is seeing a resurgence and ultimately could snatch victory from the dark overlords in power for the working class.