Unions and campaigners challenge Southampton cuts inside Labour and out 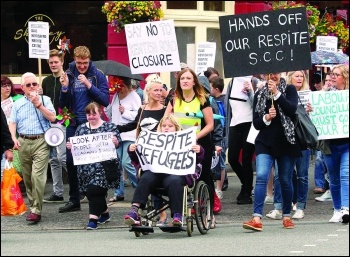 The phony unity in Labour has been exposed! Blairite cutting councillors in Southampton have had their proposals to close two care homes opposed overwhelmingly by Labour Party members as well as by council unions Unite and Unison.

Angry workers and residents’ families took the opportunity to voice their opposition outside the South East regional Labour conference on 3 November by blocking the road outside of the venue. The union-organised demonstration succeeded in having the current leader of the council removed from the list of speakers at the conference. The demonstration was also supported and joined by campaigners fighting to re-open Kentish road respite centre – a service closed by the previous leader of the council, and now prospective parliamentary candidate, Simon Letts. As Simon gingerly approached the megaphone he was booed by the Kentish Road delegation and made his way into the conference without daring to have a say.

The correct strategy has to be to confront councillors making cuts and to expose them as being responsible for undermining Corbyn’s anti-austerity message.

An emergency motion to propose a legal no-cuts budget was moved at Southampton Itchen constituency Labour Party (CLP). The motion won support from trade unionists who played a crucial role in bringing down the previous Tory council administration but who have seen their members continue to lose jobs under Labour. The motion passed says: “This CLP believes to win the fight against Tory austerity it is necessary to oppose all cuts to local services. Southampton City Council should adopt the call from Unite and Unison to set a legal no-cuts budget.”

The leader of the council has emailed all Labour members to remind them that they have no say on the voting of councillors and can only make recommendations. This has to change! Councillors should be held democratically accountable to the anti-austerity Labour membership and the unions. Where they vote for cuts they should be removed from office and replaced with those who will fight!