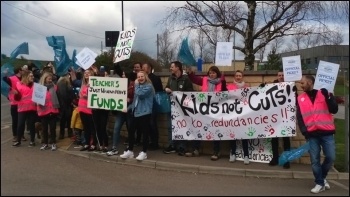 Hundreds of education campaigners rallied in London on 22 June at a ‘Together for Education’ event organised by five national trade unions and education campaign groups, united in opposition to Tory funding cuts.

Determined to shout loud for the needs of all children, the cruel reality of Tory cuts was there for all to hear. The mood of anger and solidarity in a hall filled with passionate people was what was needed to fire up some tired teachers, heads, governors, teaching assistants and parents for the battle ahead after a long academic year.

An explosive tinderbox has been created by the combined effects of funding cuts per pupil of 8%, rising school costs, increased teacher workload, cuts to pay and pensions, high stakes testing (stressing teachers, pupils and parents alike) a narrowing curriculum, and falling support for children with special needs and those at risk of exclusion.

Reports of activities across the country show how the campaign is building support at meetings, rallies, demonstrations and significantly, through growing numbers of strikes, all showing education is at breaking point.

Certainly a highlight of the day was hearing from Jeremy Corbyn and his commitments for an incoming anti-austerity Labour government to fund our schools and end SATs tests for primary schools. It was good to hear from local councillors joining the campaign.

But the loud applause for Jo Grady, newly-elected general secretary of the University and College Union, calling for national coordinated strike action to stop education cuts, shows what is needed is action to stop the cuts now.

Linked to Corbyn’s call to reverse school cuts, should be a fight by Labour councils to use their reserves and powers to stop school cuts, combined with strike action across education.

This would gain huge support and create enormous pressure for an immediate general election. The crisis in education must become a crisis for the Tory government.