Uniting workers and public to fight the cuts

Elections to the RMT union national executive committee (NEC) are taking place and RMT activist and Socialist Party member Jared Wood is contesting for a place representing the London Transport Region. Ballot papers will be posted to members’ homes on 21 October. Jared spoke to the Socialist about why he is standing. 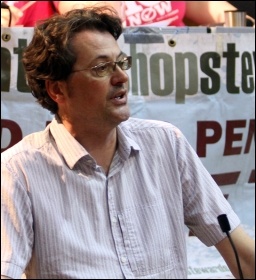 What does the NEC do and why is it an important body?

The NEC directs the political policy of the union and governs our relationships with the Trade Union Congress (TUC), other unions and the wider labour movement.

It is the only body of the union that can instruct members to take strike action or end strike action and accept a settlement with an employer.

What are the key issues facing RMT members in London and nationally and what can you offer in terms of addressing these issues?

The key issue we face in London is the £1 billion a year cut to Transport for London (TfL) funding as a result of the Labour Mayor and Tory government joining forces to withdraw the subsidy for London’s transport system.

I will focus on the need to bring together workers, unions and passengers in a united fight to restore that funding. Unless we win our fight and restore the subsidy, we will be facing battles against new cuts in jobs and conditions every few months.

The latest cuts programme from TfL is called “transformation” and threatens widespread job cuts and regrading of our engineering members. We have to resist this and maintain a safe railway as well as protecting members’ jobs, pay and conditions.

We are currently in dispute over London Underground pay and conditions. Members on the tube are suffering brutal shift patterns and we need this addressed. We routinely work seven days without a break including shifts starting before 5am, finishing after 1am or working overnight. It cannot go on like this.

Members working for the tube’s sub-contractors are also fighting for their rights. Our cleaners are now balloting for strike action demanding travel facilities on the tube and sick pay. Winning these demands and increasing our membership amongst cleaning grades is important for RMT.

What role do you think the RMT should be playing in shaping a trade union response to the Johnson government?

RMT has been instrumental in getting the TUC to agree resolutions calling for generalised strike action against Tory austerity. We must continue to do this, but it is clear that the bureaucracy of Congress House (TUC) is not keen to put these resolutions into action.

I will be arguing that we do more to build alliances and joint action between those unions that are willing to fight austerity alongside us.

The TUC and, for that matter, the Labour Party have missed a huge opportunity to call a national demonstration to oppose the Tories and demand a general election. RMT should seek to develop a coalition of the willing to build a unified trade union resistance to Johnson and the Tories.

Along with the Socialist Party, Bob Crow of the RMT in 2010 initiated the Trade Unionist and Socialist Coalition (TUSC) as a left alternative to New Labour. The election of Jeremy Corbyn as Labour leader has significantly changed things, even though the majority of Labour MPs and councillors remain Blairites. What political stance should the RMT adopt?

The election of Corbyn transformed the political situation. However, he has not used his victory and re-election to the leadership of Labour to deal decisively with the Blairites and a Parliamentary Labour Party that would seek to block his left programme in government.

He has also not been able to clearly promote a position of leaving the EU on the basis of enhancing workers’ rights while rejecting the EU’s constraints on nationalisation, state aid and public investment.

All of this together is undermining Labour’s support but it is still possible that a radical manifesto and an energetic campaign could deliver a Corbyn government at the next election. Therefore, it is right that RMT does whatever we can to bring this about.