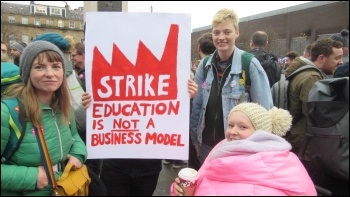 Academic staff in the University and College Union (UCU) are striking at 60 universities for eight days until 4 December.

If the university bosses don’t immediately back down, the pressure needs to be kept up, with more strike action in the New Year. And university UCU branches that didn’t meet the Tory’s anti-democratic 50% threshold should be re-balloted so they can join in.

In Liverpool, management lied when they said students would be breaking the law if they joined picket lines. They even threatened international students that they risked jeopardising their visa if they refused to cross the picket lines.

But Socialist Students is building support for the UCU action among students.
The whole union movement should come to the aid of the UCU.
Unis like Leicester have threatened to remove members’ strike-day pay, all in one go. In London, the UCU strike rally is being held jointly with the postal workers in the Communication Workers Union (CWU) who have had their right to strike – against precariousness – blocked by the courts. 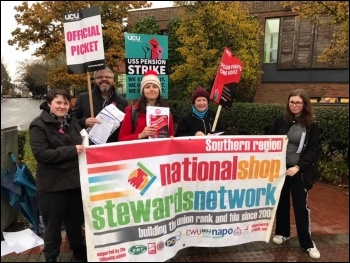 “I have lost belief in the capitalist project.” This was how one picket described his experience of the insufferable workload placed on teaching staff at Southampton University. “When I asked for a review of my work, I was offered a return to last year’s. I reminded them that was the workload that led my ill health and time off work.”

From senior staff to part-time PhD teachers the story was the same – an endless drive to deliver more with less.

Pickets surrounded the campus from 8am and stayed in the rain until the rally finished at midday. Socialist Student members visited pickets and were warmly greeted everywhere they went. Hundreds turned out to chant, “Workload, Overload!” and listen to speeches from striking UCU members. This included Socialist Party member Bea Gardner from the UCU branch executive. Bea brought a message of solidarity from students who had voted to back the strike. That brought another loud cheer from the strikers.